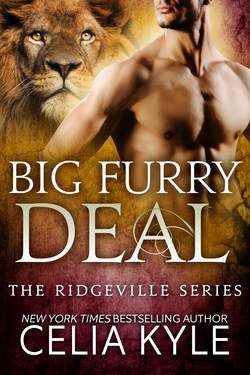 For Millie, having a mate is a horrible, no good, he’ll end up very dead, bad idea. She’s got what some refer to as a “control problem.” In other words: she has no control and that’s her problem. So, she stays away from others, keeps to herself, and generally tries not to kill people. Except the pride Prima—Maya—has this “awesomesauce” idea and suddenly Millie’s at a pride picnic surrounded by people… and then she meets her mate. Her tall, delicious, please-may-I-lick-you-from-head-to-toe mate. Now she prays her powers don’t suddenly decide Wyatt is better off six feet under.

Lion shifter Wyatt Dane knows he’s not the kind of man who takes a mate. His own mother proved he wasn’t worth loving. But then he meets Millie. Millie with her fiery hair, generous curves, and dangerous powers. He tries to resist her, forces himself to reject her, but then she returns and he realizes he can’t let her go. Her powers will just have to figure out how to deal with his presence. He’s keeping her. Period.

But someone from her past didn’t get the “she’s mated” memo and he’s determined to have her, no matter the cost.

Warning: Big Furry Deal contains kick ass violence, some potentially trigger content (what do we expect from the bad guy), and copious hilarity. Be prepared for laughing, crying, and cringing. As always, curvy women rock, boys drool-girls rule, and your mileage may vary.

“Mil-lie!” Maya’s bellow vibrated the entire house. The Ridgeville Prima’s roar caught her off guard and her power shot to the surface in an agonizing rush, anticipating her need for protection. The lioness must have let herself into the house Millie shared with the Mastin sisters. The owner, Gina, recently mated and moved away, leaving the place empty and perfect for Millie and the sisters.

“Damn it, not now,” Millie whispered to herself and pushed back, shoved the hate deeper into her body and wrapped it up tight. “She’s the freaking Prima. The mate to the Prime and one of the people who can kick our ass to the curb.”

“I’m also the Queen of Booblandia, but whatevs.” Maya’s voice filled the room. “And talking to yourself can be a sign of schizophrenia. Are you schizophrenic?”

Millie smiled as she rolled off the bed and turned toward the bedroom door. “No, not schizophrenic.”

Maya narrowed her eyes. “Are you sure? I bet a schizophrenic person would say they weren’t schizophrenic to avoid wearing a straitjacket in a non-bondage-happy-fun-times way.”

Millie rolled her eyes. “I’m sure.”

The Prima smiled wide. “Good. That means you can have multiple personalities instead. Because then I’d get two, or more, new best friends instead of one.”

Millie tilted her head to the side, confusion filling her. “Huh?”

Maya rolled her eyes. “I swear, does no one follow a conversation here?” she huffed. “Gina-the-whore mated Gavin-the-dog, which left me down a best friend. So, you’re here now, and you talk,” Maya scrunched her nose. “Not that I’m saying anything bad about the Mastin sisters and their not talking thing. I mean, I’m not a totally insensitive bitch, right?” She waved her hands. “Anyway, I’ll apologize later. But what this all means is you take her place. Except you-you were supposed to be a new bestie. So now I’m down two besties. And that means you need to have multiple personalities and take up both spots.” Happiness and excitement filled Maya’s features. “Are you picking up what I’m putting down?”

Millie sifted through the babble. Okay, she knew Gina (a Ridgeville lioness) recently mated Gavin (a dog, er, fox and brother to another Ridgeville pride member). Which left this home empty and a Gina-sized hole in Maya’s life. But then there was the “you” and the “you-you” and…

Maya heaved a put-upon sigh. “None of you listen. Okay, let’s do this again.” The Prima straightened and held up a finger. “Gina-the-whore—”

“For the love of—Maya!” Alex, the Prime and Maya’s mate, yelled. His voice echoed through the house, causing the Prima to jump.

Millie wished that was all it did to her. No, the enraged part of her burst free of its moorings and shoved against her control. It sliced through layer after layer of her bindings and stretched the last that kept it within her body.

The memories made it too raw, too powerful. If only she’d had an hour, half an hour… hell, with a few minutes of quiet time, she could have ensured it was tied up tight and ready for visitors.

“What?” The Prima seemed ignorant of her struggles.

Maya scoffed and turned toward the hall to yell at her mate. “We can’t be late. We’re the most important people there.”

Millie struggled to breathe. Her birth certificate slipped from her fingers, and she fisted her hands, digging her nails into the soft flesh of her palms. Her abilities scraped the last layer of her mental walls. It sensed Alex in the house. Part of it recognized him as a mated male, as someone who’d helped them, but another thought drifted forward. Even a mated male could beat a woman. Even a mated male could forc—

Panic set in, her heart racing as her lungs fought to bring air in and out of her body. Sweat beaded on her forehead, peppering her in the salty fluid. The scent of blood soon joined the others in the room, and the Prima’s gaze swung back to her.

Millie ignored the worry and shock in Maya’s gaze. She had her own crap.

Please, please, please. She wasn’t sure what she was begging for. Relief? Forgiveness? An end?

She was so tired, so tired of living this way day in and day out. For one moment she’d like to not have to worry about accidentally harming someone.

Maya ignored him and approached her. This was a different version of Maya, one that didn’t have a ready smile and obnoxious jokes on her lips. This one was worried with her brow scrunched and concern in her gaze. “Millie? Hon?”

She shook her head and took a step back. That part of her still fighting to break free attacked her to get at the one who’d scared them. Damn it. She’d knocked Harding on his ass months ago. At the time, he’d been down for the count for a day or two. Since being in Ridgeville, she’d grown stronger. She wasn’t sure what would happen if her power struck out now.

She remembered the glory of Harding’s nerves sliding over her palms as she manipulated his mind. It’d reveled in the flavors of his pain. The power had a taste for it now and she didn’t want to see what else it would enjoy.

Millie eased closer to the window. It opened to the backyard. She’d run, beg her cat to take control and carry them away from the house. She’d run and run and fight to keep away from everyone.

“Stop.” She held up a bloodied hand, trying to keep the Prima at bay.