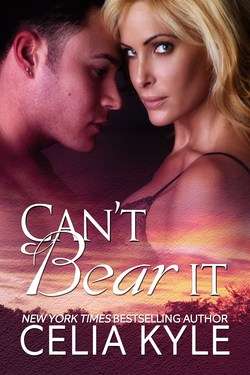 Meg is a lioness on the run. After being used and semi-abused by her pride for more years than she cares to count, she's leaving the pride life behind and heading to Greer, North Carolina. A new life, a new home awaits her there, and she can't wait to begin anew and settle down to make little lions of her own. Only, the one man who qualifies for the job also has a tiny little problem. He's a man-slut.

Jacob loves his slutastic behavior and wouldn't have it any other way. Men, women, either, both, they all do it for him. Until he meets a certain curvaceous lioness who changes the rules and makes his bear want something it has never wanted before…a mate.

Sex had become a chore. Maybe not a  chore, but it wasn’t something Meg looked forward to either. She had her choice of males, three to be exact, though the eldest of the lions was able to overrule her if he desired. And then there was the fact that the three men she could choose from also serviced her sisters. And cousins. And aunts. Oh, there were a couple of women in the pride who’d migrated from other groups as part of a “lioness exchange” in order to ensure there was no in-breeding. But the fact remained. The dick that entered her had probably been inside one of her family members. Recently.

“Margaret!” Great. Her Aunt Nia. “Margaret! It’s your turn, dear heart.” Meg sighed and brought her legs closer to her chest and rested her forearms on her knees, her chin then settling on her forearms. She stared across the street, watching the pigeons flutter and fly around the fountain, pecking at the seeds dropped by the old man who lived down the street. How she envied the birds. Their monogamous nature meant that they’d only mate with each other as long as they lived. She longed for the same treatment, regardless of how odd it made her.

Pride ladies did not object to sharing. They bore the children they were gifted with gladly, and then surrendered them to another pride or they joined the ranks. A lioness definitely didn’t look outside the pride for sex. Ever. A lioness gave birth to lion cubs.

Meg tore her thoughts away from her heart’s desire and plastered a smile on her face before turning her attention to Nia. “Hey, Aunt Nia.” Her aunt harrumphed. “I’ve been calling for you, Miss Margaret. It’s your day and Lincoln has a mid-afternoon meeting. Marcus has a dinner date with some woman he’s thinking of bringing into the pride, and Nicholas wants to do his morning run. They’d like you to come in and make your choice so they can get on with their day.” Her choice. Right. She held back her snort of contempt. Barely. Out of the three of them, Meg preferred Nicky, but she knew he wasn’t attracted to her plus-sized frame.

He’d be a wham, bam, please don’t get your juices on my Armani man. She could always count on him to be no-nonsense about the mating. It was a job to him, just like running Lion Inc, the pride’s investment firm. Hell, one time he hadn’t even ended his phone call and had just taken her across his desk without breaking his concentration on the call or sounding out of breath. That took talent… and indifference.

Tears burned Meg’s eyes and she blinked them away. No sense in wallowing in her sorrow. She’d done enough of that since waking.

Her aunt stroked her head, her fingers sifting through her hair just as her mother had done before leaving her for another pride. “Oh, Margaret, I know this is hard on you, but the men work hard to care for us all. It’s for the good of the pride. And your gift will only strengthen us.”

Her gift? How about her ra–No, it wasn’t like that. She went almost willingly.

Almost. “I know, Aunt Nia, I know. Let Linc know that I’ll be in shortly and we can dispense with the mating. He should make his meeting without a problem.” Her aunt patted the top of her head like a person would pet their loyal dog. Good girl, Megsy. Who’s a good girl? That’s right, Megsy’s a good girl. Then they’d toss a Frisbee and she’d trot off after the toy. Just like a good, obedient little puppy. Or lioness. Do as you’re told, Margaret. For the good of the pride, Margaret. Your will is secondary to that of the pride.

Meg pulled away from her aunt’s touch and returned her chin to her forearms.

Her aunt cleared her throat. “I know this is hard…”

“Very well, then. I’ll go let the men know of your choice.” Meg listened to her aunt’s feet padding across the dried leaves and twigs, the dead foliage cracking and creaking with her every step. Deep down, Meg’s lioness stirred.

No. It’s Nia. We’ll have Lincoln to contend with shortly.

Her lioness growled and snarled.

Yeah, she felt the same way. Regardless of how impersonal she wanted these encounters to be, she truly longed for the love that was supposed to accompany coupling.

As clichÃ© as it sounded, she wanted her one true love to actually  make love  with her.

Meg rolled to her feet and followed in her aunt’s footsteps. Except, regardless of her larger size, she navigated the yard on silent feet. Something no one in her pride was able to do. Quiet as a mouse wasn’t just a saying for Meg, it was life. Like a true lion, she could creep and crawl and not make a sound.

She walked to the front door, her head held high. Just because she wasn’t looking forward to the next few minutes didn’t mean she had to be as meek as a mouse. She was a lioness of the Atlanta pride.

Lincoln was waiting for her. “Margaret. I’ve been waiting.” He glanced at his watch.

“Let’s get this finished, shall we? The office called and they want to move up the meeting.” His phone rang. “Hello?” He held out his arm, gesturing for her to precede him.

She didn’t say a word. She couldn’t. Tears stung her eyes, gathering on her lower lashes. Meg couldn’t blink them away this time, so she wiped the back of her hand across her eyes and prayed that Linc was too involved with his call to notice.