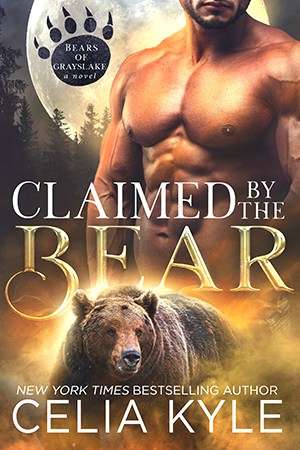 Who needs claws when you’ve got a baseball bat? Lauren Evans sure as heck doesn’t.

Human Lauren has a protective streak a mile wide and one immediate goal in life—get her best friend out of an abusive household. If that involves a little bat-based redecorating, so be it. Unfortunately—or fortunately—a certain sexy-as-hell cop breaks up the fight before she has a chance to really get going. Grayslake police officer Van Abrams is too hot for his own good, and his handcuffs make all those wonderful places tingle. Too bad he, you know, arrested her and stuff. But then he becomes overbearing, demanding, and commanding. Suddenly Lauren finds herself in his arms, in his bed, and mated to his werebear butt. What’s up with that?

Werebear Enforcer Van Abrams doesn’t want anything to do with humans. He’s got reasons, and they’re damn good ones. He doesn’t need to explain himself to anyone, especially the curvaceous, luscious, gorgeous, human Lauren. Then, his bear decides Lauren is his mate and Van’s anti-human feelings abandon him. He still hasn’t figured out if that’s a good thing. Of course, when danger rolls in from Boyne Falls and joins with a powerful prick from Grayslake, Van realizes that, human or not, Lauren is his.
Van hopes he can kill their enemies and still make it home for dinner.

Warning: This book contains bad guys (more than one) being bad to good girls (two if you’re counting), and one group of humans who sorta end up… dead. Unfortunately, all that comes with a lot of blood, tears, and balls of fur. In this one, boy bears really do drool and human girls rule (and kick ass). We also learn that you can never have enough baseball bats, brake fluid, or fire pokers. Just sayin’.

Van wondered if killing a wolf would start a blood war. Just one. Not the whole pack. Not even the Alpha. Nope, he had his sights set on the Redby Beta, Morgan.

He leaned against the brick wall, cell phone pressed to his ear, as he focused on the cars entering and leaving the gas station parking lot. He’d stopped for a cup of coffee. Five minutes, in and out. Except his quick break turned into a fifteen minute phone argument with the wolf.

His beast took orders from one man—Ty—his older brother and Itan of the Grayslake bear clan.

“And as the Grayslake Enforcer, I’m telling you to give them additional time,” he snarled in return, keeping the sound low.

Humans strode past him left and right and it was illegal to expose themselves to non-shifters. Sure, a handful of older humans knew of them, but it was important to keep a low profile.

“The order was twenty-four hours for singles and forty-eight for families. It was issued by your Itan over three weeks ago.”

Fuck. Van wondered if Ty realized the cluster fuck he started by agreeing to work with the wolves. It wasn’t the Itan dealing with logistics, organization, and finally punishment, if his orders weren’t followed. No, that fell to him and the hardheaded asshole on the phone.

It’d been hell since Ty swept into a nearby town, Boyne Falls, and ordered the hyena Alpha and ruling circle killed while also demanding all hyenas leave the area. The Alpha had been involved in the kidnapping of Ty’s adopted son and, as a result of the hyena participation, Ty’s mate Mia had been injured and nearly murdered.

Van didn’t disagree with the punishment—hyenas in general were a nasty breed. The werewolf alliance, however, caused his bear to bristle and balk at following Ty’s directives.

“I’m aware of the order. As you said, it came from my Itan. That doesn’t change the fact that leniency is necessary for those in the hospital who need assistance vacating the town. Helicopters capable of life-flighting someone to another hospital don’t materialize out of thin air and some patients have specific medical needs.” Van’s fingers tingled and warmed, a sure sign his bear was annoyed by the wolf.

One on one, the beast could take the smaller male and his animal was ready to prove it.

“Oh, fuck the order. I’m telling you they get enough time to ensure they don’t fucking die on the helipad.” He held onto his control by a thread, his whole body trembling with the effort. “Leave them the fuck alone.”

Van closed his eyes and banged his head against the brick wall. “Seriously? I don’t know how it is with wolves, but bears have common sense with a lot less hardheadedness.”

Not a sound came over the line for several seconds and Van wondered if Morgan had hung up.

Unfortunately, the man spoke. “Are you challenging me?”

“Fuck me,” he grumbled and ran a hand over his face in frustration. “No, I’m telling you to leave the patients in the hospital—along with their families—until arrangements can be made. Go be an asshole to everyone else, but quit messing with the injured and ill.”

Another moment of silence.

“I will speak with your Itan.” On Morgan’s lips, his brother’s title sounded like a curse rather than a position of respect.

Van’s bear bristled at the insult. He opened his mouth to ask when he wanted to meet in the pit, but the rapid beep of his phone indicated the call had ended.

“Son of a bitch,” he growled through clenched teeth and a low crack sounded in his ear. He pulled the phone away and glared at the hunk of plastic, metal, and glass. The damned screen splintered, lines marring the surface, making the damn thing useless. “Fuck.”

Screw it. Van finished the job by crushing the device. Taking a little help from his bear, he squeezed until the phone was nothing but jagged bits of its former self.

A soft throat clearing pierced his focus, but it wasn’t until the newcomer spoke that he pulled his attention away from the phone.

“Um, Officer Abrams?” Van recognized the speaker. One of the clan guards, but he was also a Grayslake police officer like himself. “Everything okay?”

He reached for a nearby trashcan and uncurled his hand, letting the pieces tumble into the receptacle. “Just fine.” Van turned toward the other cop and didn’t miss the cautious step the man took in retreat. “Just fine.”

Damn it. He took a breath and released it in slow increments. It wasn’t the man’s fault the wolf pissed him off. “Sorry. Everything’s fine. How are patrols this morning?”

Van wasn’t just another cop, he was the clan’s Enforcer. If bad things, illegal things, happened within the clan or affecting the clan, he was the one who carried out justice. He did the heavy, bloody lifting. Which was why he was saddled with handling the issue in Boyne Falls.

And normally, Isaac would be around, waiting to patch up their asses when they needed a Healer. But Isaac… he wasn’t going to think about Isaac. Not at the moment, at least.

Considering the clan had lost four men due to the machinations of Ty’s mate’s family and hyena interference. “How’s everyone feeling? We got any hotheads?”

That was the last thing he needed. The clan was already hurting. He didn’t want to make it worse by punishing someone for letting their beast free and going after the hyenas themselves.

“No, sir. Upset—angry—but we all know you and the It—” A human walked by and the officer coughed to cover his near slip. Damn humans were everywhere.

“We know you and Ty are handling things the way they need to be.

8 thoughts on “Claimed by the Bear”