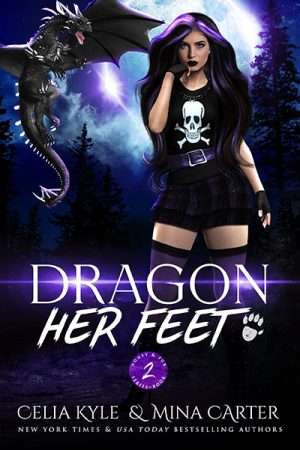 Katie Carmichael may not be a scary badass dragon capable of toasting her enemies to a crisp, but that doesn’t mean she’s a pushover. And sure, the roaring, fire-breathing hottie is, uh, hot, but she’s a chick with a plan. A plan that includes a secluded old farmhouse and doesn’t include a tall, heavily muscled, and totally delicious weredragon.

Joey Kenton, new owner of said old farmhouse, has plans of his own. They revolve around one, curvy, spitfire werehedgehog and whether their children will be hoglets or dragonlets—Joey would be happy with either. Until Katie’s life is threatened and he realizes that her life is more important than his love for her.

Of course, Katie realizes Joey is an idiot and when she revises her plans…

Katie wondered if murdering a pregnant woman was two counts of homicide or one. Honey—said pregnant woman, her boss, BFF, and mate to Katie’s werehedgehog Alpha—was driving her to drink. Between her random cravings, scattered thoughts, and continuous whining, Katie was ready to end the woman.

Her tiny four-door car bounced and shook over the aged dirt road, dust billowing in her wake. She kept the windows shut, air condition on recirculate to keep the country lane’s dirt from invading her vehicle. It was a long drive between Honey’s Bar & Grill and Old Man Kenton’s farm. But it was one she’d been making for a few years now. Unfortunately, this could be her last visit. Unless she could convince Honey that Katie was right and she was wrong. With a capital “W.” Lowercase letters did not work with Honey.

“But the house has got two floors…” Honey whined.

Katie put her cell phone back to her ear when the annoying sound ended. “And we’ll get baby gates to keep the kidlets from falling.” Then she remembered that her friend was mated to a werehedgehog. “With itty bitty slats. Super-small even.”

“And then there’s all that land.”

“We’ll get a lawn mower for Blake. Just think of it, a half-naked man dripping with sweat that you can safely ogle all day.” Safely being the operative word. Katie’s Alpha was a bit possessive when it came to Honey.

“That house is huge.”

Well, yeah, the main house was a smidge on the big side. Katie’s plan was to split the cost of purchasing the farm with Honey and Blake. Since they were mated with a hedgehog-shaped bun in the oven, they’d live in the main house while Katie took over the converted barn. Clean and easy.

Katie repositioned her cell phone and looked at the house in the distance. “Okay, it is big, but I’ll split a cleaning lady with you. Fifty-fifty.” Even if her place was tiny compared to Honey’s.

Katie knew that, too. It’d taken her thirty minutes to get from Honey’s to Old Man Kenton’s, and she was just now pulling into the farm’s driveway. “I know, but that means it’s quiet.” She sighed. “Look, I really, really wanna buy this place. Old Man Kenton…” He’d been like the loving grandfather she’d never had. “If you don’t want to buy, we won’t. Simple as that.” Her heart stuttered at the thought.

She popped the car into park and cut the engine. Phone now plastered to the other ear, she stared at the rambling farmhouse, admiring the hundred-year-old building with a mix of heart-wrenching grief and envy.

More than one Sunday had been spent on that rickety porch, drinking iced tea with Old Man Kenton. He’d go on and on about his family, telling stories of his relatives long dead and then those who lived but never visited. He’d been forgotten by his family on this plot of land, the house too big for him, yet he’d been unwilling to sell out.

“They’ll take it from my cold, dead fingers, Katie-girl.”

He was cold and dead now and everything in her told her that the farm was hers. She didn’t care about the man’s absent family. Where had his grandson been when the old man was declining? Where had he been when Katie delivered meals every day or read to him every night?

“Look, I’m here. I gotta get a move on the cleaning and packing. The attorney told me that I have permission to box things up. He said he couldn’t reveal the terms of the will just yet, but he could safely allow me access and he’d look the other way if a few mementos went missing.” A lump in her throat formed with the last few words. Mementos. How did someone pack up years of memories?

“Katie,” Honey sighed and she sensed a softening of her friend’s opinion. “I’ll come look at it with Blake tonight.”

“Really?” Katie hated to get her hopes up, but that couldn’t be helped.

“Really. From what you said, it’s a good place to raise kids. Lots of space, a big house, and we’ll have you next door.” Everything Honey said was true. “And the barn house has enough room for you, your future mate, and your adorable hoglets. Though I want to call them piglets since that’s cuter, but Blake…”

Katie tuned out Honey’s ramblings, instead thinking of the future, a possible mate and—gah—kids. Of course, the mate had to come first. Well, ideally the mate would come first. For a while she’d thought her Alpha, Blake, was that guy, but then she’d seen him fall head over quills for Honey. That had been that.

A glance at her watch revealed she needed to get a move on. She planned on spending a few hours packing and her mobile chat with Honey was eating into her time.

“Hey, chickie, lemme let you go. I’ve got to get to work. M’kay, love you, bye.” Katie didn’t give Honey time to object. They’d been friends for so long, she hoped—prayed— that the Incubator of the Baby didn’t get pissy. Or cry. God, the woman could cry at the drop of a shot glass.