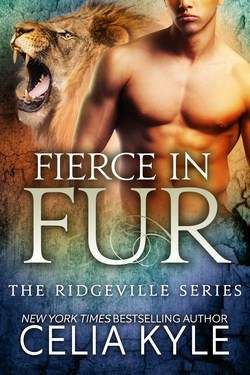 Elise really did love her family. Mostly.  Except they just wouldn’t leave her the heck alone.  Yes, she’d just returned after two years of hell at the hands of a militant group called Freedom. And, yes, she was a severely broken Senstive. But, no, she wasn’t a baby who needed to be coddled and wrapped in cotton.  Which was why she got the hell out of Dodge and headed to the one place she knew she’d feel more herself and less cotton-y: Ridgeville.  Only her escape didn’t go as expected. There was a whacked out wedding, followed immediately (really immediately) by Elise putting her nursing skills to use and catching a couple of babies. Somewhere along the way, her friend Maddy worked her Sensitive magic mojo, and Elise began to feel more like herself and less jacked in the head.  Of course, her life took a turn for the O-M-G-Awesome when she stumbled across her mate.  Did she mention he was over six feet of lickaliciousness?

Brute had never put much thought into the idea of an all knowing deity. Not that he didn’t believe, he just hadn’t ever pondered the idea.  He was too busy protecting the Prima (mostly from herself), protecting the pride (mostly from the Prima) and generally keeping his family from murdering each other (often). But the day he met the curvaceous fox he’d call his own was the day he figured there was a God, and the guy kinda liked him.  That thought stuck with him until he found out that his sweet fox was the battered and bruised Sensitive that had been rescued with Maddy.  Then his mind centered on helping his woman heal and was most definitely not on the hardness of his junk when she was near.  Nope. Not at all.

When they get to sexy times, it’s all broken beds and orgasms until a threat from the past shows up on Elise’s doorstep. Will Brute be able to prove to his little fox that the gentle giant can become a furry fierce lion when needed?

“The best laid plans of foxes and felines often go awry. Or fucked up beyond all recognition. But that second one isn’t very kid-friendly, is it?” – Maya Josephs, Prima of the Ridgeville Pride who is very, very pregnant and very, very unmarried.

Somehow, Brute’s baby sister had morphed from an adorable, toddling cub to a bloodthirsty bitch of gigantic proportions. His mother assured him this happened when lions hit their teen years.

Brute didn’t recall being such an ass.

His mother told him it was because he’d been born with a dick.

And that had ended that discussion.

“Honor,” he sighed and rubbed the top of his head, palm tickled by his growing hair. It was time to bust out the Bic again. “Explain to me why slaughtering Jenner would be a good thing. Just one more time.”

Their parents were vacationing in Florida, which left family matters squarely in his court.

“Because.” His baby sister, all of sixteen, snarled at him like a full grown lioness. Why did his parents keep having cubs after him? Why?

“I can’t go to the Prime with ‘because’ when one of the Prima’s favorite lions suddenly turns up dead during a run. That would upset the Prima, which upsets the Prime, and then things get bloody and I have to clean up the mess.” He raised a brow. “Try again.”

Honor stomped her foot and Brute could have sworn that the tile cracked beneath her. Damn, their mother was going to be pissed. Not as angry as she would have been if Honor had succeeded in ridding the world of Jenner, though. So, he figured he’d be thankful for the cracked tile.

“Brutus.” His name was uttered between clenched teeth.

Now, anyone outside the family knew not to use his given name under threat of blood and gore. Unfortunately, that didn’t apply to family. His momma had laid that law down long ago.

“Honor.” He kept his tone strong, but level, gaze centered on the little bit of lioness before him. He couldn’t show fear. It didn’t matter that sweat was dripping down his back, sliding and settling at the base of his spine. No fear in the face of the enemy.

You are a fierce lion. You are the king of the jungle. People run when you roar. Stay strong…

One of Brute’s other sisters, Emma, waltzed into the room, nose buried in her e-reader.

“She saw Jenner hitting Genesis last night with Maya’s friend, Gina Ernst.” Emma turned her e-reader off as she slid into her seat at the kitchen table. “And they were cozy.”

Honor pointed at her younger sister, every muscle in her body tense. “See! He needs to die. No, dying is too good for him. What did Carly do to that guy when she was kidnapped? I wanna do that.” Another stomp of her foot.

Brute sighed and gave Emma his attention. She was the family angel while Honor was the family… Psycho Hose Beast Demon from Hell. “Translation?”

“She thinks he’s her mate.”

God save him from females. He swung his attention back to his now screeching sister.

“You bitch!” Honor launched her lithe body across the kitchen and Brute snagged her around the middle with ease, holding her back so that all of the Mauers remained intact until their parents returned.

The she-cat in his arms scratched his forearms and beat her heels into his shins, fighting his grasp with everything her little body had. As if she’d be able to break his hold.

Little Emma, calm as always, diverted her attention from her toast to Brute. “Can a virgin be a whore?”

“When you let any male sniff at you and buttfu—” Brute slapped a hand over her mouth and growled low, Honor freezing in his arms.

“Emma, have you…” The males in the pride knew better than to sniff after his sisters, but he couldn’t control every human. And then there were the bunnies…

Brute let out a sigh of relief. Good, he wouldn’t have to kill anyone. Today.

“Everybody decent?” A thumping knock against the front door as it was pushed open followed the greeting and Brute sighed in relief, almost losing his hold on Honor in the process.

Grayson could get him out of this mess. The pride’s Second always managed to calm females. Brute figured it was because the male had fucked so many, but he didn’t really care how the other lion came by his ability. He just wanted his sister calm. And not trying to kill anyone.

The Second stepped into the kitchen, gaze sweeping the room before settling on Brute. “What’s doing, big guy?”

Emma didn’t look up from her breakfast, e-reader once again on before her. “Honor wants to kill Jenner because she thinks he’s her mate and she saw him going into Genesis with Gina Ernst. Brute said no because it’d upset the Prima which would upset the Prime which would end with bloody things for Brute. And because I don’t believe her, I’m a virgin whore.” Emma gave Brute her attention. “Anything to add?”

His mother should have left the thirteen-year-old in charge.

Another outraged yell and wiggle snatched his attention and he tightened his grip on the wriggling Honor. “Damn it.”

“Stop.” The Second’s voice was low and calm, a simple but powerful order that everyone followed without question.

Grayson’s attention turned to Honor in particular. “Jenner is not your mate.”

“He’s not. Period.” Grayson’s eyes flared to amber for a moment before settling back to brown.