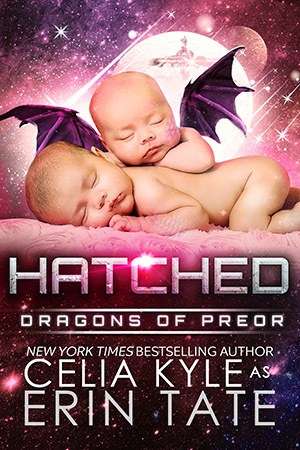 Taulan joi Lana Coburn, War Master of the Preor third fleet, is finally having his wishes granted.  He has a mate and will soon have two dragonlets to protect and love. But only if he can live to see them born. Or, as his Lana says, hatched.

People who tell pregnant women to walk during labor because it will make things “easier” had never pushed a watermelon out of a hole the size of a lemon. Lana was fully prepared to take a watermelon and shove it up the next person’s hole if they even talked to her—though she did stop short of imagining what she’d do if they gave her additional advice.  That was one bloody fantasy she wouldn’t mind indulging.

Unfortunately, it’d have to wait a little while. Specifically, until she gave birth and recovered. Then she was all over being War Mistress and mate to the Preor War Master, Taulan.

She’d bloody him up, too, while she was at it.  He was the one who’d gotten her pregnant, and not with one alien baby, but with twins.

Twins. Two. More than one.  She still hadn’t quite wrapped her head around that concept.  Twins didn’t run in her family and the Knowing—the blood history of the Preor that she gained when she met Taulan—couldn’t provide her with probabilities since human-Preor matings were still a bit of a mystery.

She breathed deep and reached for a nearby piece of furniture, one of the chairs she’d had brought to the ship from Earth.  Since her mate didn’t have large dragon wings like other Preor, they hadn’t needed the backless seating that populated others’ quarters.

Wings… tears stung her eyes when she thought of all her mate had lost.  Even more blurred her vision when she realized she was crying—again.  She cried because she was crying. And then she cried harder because hormones made her cry.