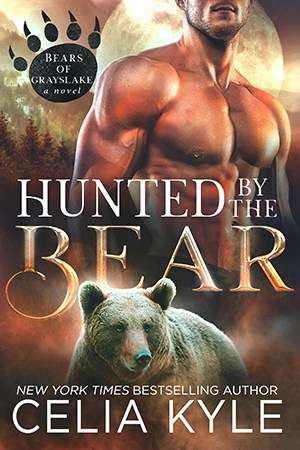 What should Trista do when faced with a hunky werebear who can’t decide if he wants to kill her or screw her? Half-hyena, Trista has spent years rotating between Grayslake, Redby, and Boyne Falls. When the Grayslake Itan—the local clan’s werebear leader—orders a purge of all hyenas, she finds herself fighting to hold onto the hand-to-mouth life she’s created. Her carefully built existence is threatened further when a gorgeous werebear strides into her life and demands not just her heart, but her very soul. She’ll think about it, but not until her shift ends at seven. Keen seems like a happy-go-lucky, sex-and-sin werebear, but that’s nowhere near the truth. In reality, his inner-animal wants to go on a bloody rampage and kill half of Grayslake—just because it can. After that, it wants to claim the seductive, curvaceous half-hyena female Keen can’t get out of his head. The animal doesn’t care that most bears wouldn’t mind a little hyena tartare for breakfast, lunch, and dinner. Nope, it peers at her through Keen’s human eyes and has one thought: mate. When push comes to shove, Keen has to decide if he would rather have the family he was born with, or Trista—the woman who makes him realize that true happiness comes in a lush, hyena-shaped package. Enjoy the third book in the bestselling Grayslake series. This new BBW paranormal shapeshifter romance from New York Times and USA Today bestselling author Celia Kyle is sure to secure a spot on your keeper shelf.

**Special thanks to Rebecca T. and Nayda V. for naming baby Abrams!**

God hated Trista and the proof was taped to her door. The evidence fluttered in the breeze, words printed with black ink on bright yellow paper.

The wind picked up again, blowing harder this time. Empty cans clinked across the grimy concrete floor. A plastic bag followed in its wake, flying over the filthy ground. A familiar ball of yellow, much like the one plastered to her apartment door, tumbled by.

Someone else was being evicted. Well, at least she wasn’t the only one who’d be miserable and homeless. Not that she wanted others to suffer, but misery loved company.

Clutching her keys, she traced the page taped to her door. It flapped, as if trying to flee, but she slapped her palm over the thin sheet.

Funny how she’d never received an initial notice. Then again, it’d only been a matter of time, right? She should have expected this after she heard of Bru’s death, but she hadn’t. She’d held onto hope that she could float idly along and pretend her landlord hadn’t been killed and a new owner wouldn’t be coming in to take over.

Trista slid her hand over the notice, letting her palm skim the rough door. Paint flaked off and pricked her skin, reminding her she was alive. And soon to be living on the streets.

Her eyes stung, familiar tears welling, and she blinked them back. The piece of paper danced in the breeze again. Reminding her of what needed to be done. She didn’t have time to cry. Besides, it didn’t solve anything.

That didn’t stop a tear from falling past her lower lashes and snaking down her cheek. It didn’t stop the second either. Or the third.

“Fuck.” She leaned against the door and balled her hand. “Fuck.” She banged her forehead and fist against the scarred surface. “Fuckery Fuck McFuckerson.”

With each syllable, more tears fell. One time, just once in her life, she’d love things to go her way.

“Fuck.” She whispered the word and took a deep breath.

Memories of her mother filled Trista’s mind. She imagined her mom pushing open the apartment door and brushing past her fifteen-year-old self. Cry me a river, build a bridge, and get over it, Trista Ann. We’ve got work to do and no one but ourselves to do it.

She allowed one last tear to trail down her cheek and one last curse to leave her lips. “Fuck.”

There, now she needed to get her things packed before she left for her night job slinging drinks at the bar down the street. Come morning she’d apartment hunt between when she got off and her day job started.

Okay, she could do this. Even if she didn’t have her mom by her side, she was an adult. She’d lived through worse, she could get through this.

Trista grasped her doorknob, careful to hold it in the right position to get the thing unlocked. It was a finicky bitch and it hadn’t mattered how many times she’d complained to Bru.

Unfortunately, when she turned the knob just right—two inches right and then one back left—it didn’t click like it should. Mainly because the door simply opened, swinging on silent hinges to reveal…

A bare apartment. Completely, utterly, empty of her possessions. The sagging couch remained along with the rickety table in the kitchen, but they’d come with the place. Her things were gone. Her pictures and mess of clothing that generally littered the floor. She had no doubt the money she’d hidden throughout the space was gone as well. She and her mom hadn’t trusted banks, especially not those run by her father’s “friends.” When her mom pissed off her dad, their account typically suffered a “computer glitch.”

Now, all of her belongings gone, it… it was too much. The rage that’d burned inside her from the moment her mother disappeared, the anger over fucking life fucking shitting on her every fucking day, boiled over.

Trista tilted her head back and screamed at the cobweb-laced ceiling, opening her mouth as wide as possible as she released the guttural roar. “Fuck!”

The yell went on and on, echoing off the concrete block walls of the hallway. The scream’s never-ending boom mocked her, reminding her over and over that she was alone.

“My mim says you shouldn’t curse. She says it’s bad.” The tiny, tinkling voice came from beside her, the tone of a high-pitched youth. She looked to her right, down at the child, and the little boy stared up at her with guileless eyes.

The part of her that hated being challenged, particularly by a male, roared its displeasure in her mind. God may hate Trista, but she loathed that piece of feral animal inside her even though she knew it’d never disappear.

Snapping her mouth closed she turned her raging attention to the little one at her side. She snarled at him, curling her lip. This behavior wasn’t her, it was its, but she couldn’t halt the aggressive attention she gave the boy. “When she pays my bills, I’ll be fucking happy to quit my fucking cursing.”

Now she was really going to hell. Squeezing her eyes shut, she leaned against the doorframe and slid down its length. In no time she went from standing to a dejected pile on the floor.

29 thoughts on “Hunted by the Bear”