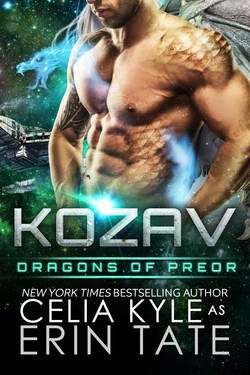 Kozav found his mate and then he lost her. Now it’s time to hunt…

Grace Hall is a nurse, not a doctor. But when five Preor warriors are brought to the emergency room and the doctors won't touch the aliens, she steps forward.  One warrior draws her more than the others. His teal wings, muscular body, and pain-glazed eyes have her torn between two desires — needing his touch and desperation to heal him. She’s going to save the Preor males, even if it kills her.  When she loses consciousness after healing them, she realizes it just might.

Kozav sen Aghin, Primary Warrior of the Preor Third Fleet, wakes on the Preor battleship fully healed yet plagued by a feeling that something is wrong. And something is… Kozav's mate was left behind on Earth—alone and unprotected.  Unacceptable. Kozav's guilt for his actions in the past still plague him and he is determined not to fail again. The curvaceous, green-eyed, dark haired human female is his to protect, his to claim and his to keep.

When someone attempts to murder Grace, Kozav is prepared to do whatever it takes to keep her safe. Even if it means killing one of his own.  Or will it be Kozav with a sword through his chest?

Grace would probably lose her job if she stabbed the woman in the eye. That knowledge didn’t lessen her desire to do the aforementioned stabbing, though. Nope. Her fingers itched to change her grip on the pen, tighten her hold, and then stab, stab, stab.

She swallowed hard and pushed back her irritation. It wasn’t the woman’s fault. Deep breath. Or even her mate’s fault. Another deep breath. Nah, the problem was with Grace. Envy turned her into a violent bitch. Not homicidal, thankfully, but a bitch none the less.

A sappy sigh drew her focus, pulling her thoughts away from the need to pluck out the chick’s eyeballs and back to the task at hand. Mainly, verifying the match. As a Senior Mating Representative, it was her responsibility to verify matches via a handy-dandy checklist and out-process the new, happy couple.

Screw it, she was a glorified cashier. And not even a well-paid one. She got minimum wage to perch behind a desk in her agency provided skirt suit with a smile on her face while she wished mates well on their way out the door.

Not before greasing the Intergalactic Mating Agency’s palm first, though. The IMA did a lot of good… for a price. Overhead, right?

Another sound, this one more of a hum, and Grace lifted her head, not even a bit surprised at what she found. The couple—a human woman and her blue-skinned Bellatani mate—were wrapped around each other. Like, literally. The Bellatani had four arms that he used to stroke and pet his new mate. A hand disappeared beneath her skirt while two others worked on the buttons of her blouse and then that fourth disappeared… somewhere.

Now was the time to put a stop to it and not just because she was jealous. IMA had a clear policy about mating during outprocessing.

One of the two moaned.

The moaned response was longer that time. The woman shifted in place and Grace realized the Bellatani’s missing hand was on his pants, fighting to free his erect length.

Yeah, she wasn’t going to ogle an off-worlder. Not today. She normally worked in mating intake, which was fine, but today the girl who handled exit interviews was out, which meant Grace had to step in and… she was not a voyeur.

She reached for a nearby tablet, one of the older thicker models that was kept around for just this purpose. Sure, it worked just fine and could access agency data, but its true purpose was for…

She lifted the hunk of plastic and metal and dropped it to the desk. Boom.

(It really was big.)

The woman squeaked, the Bellatani roared and Grace smiled. At least she had their attention.

Long, pale fangs unfolded from the alien’s mouth and Grace held it together, not flinching when he hissed. Bellatani talked a good game but generally didn’t touch a female that did not belong to them. Not in anger or passion. Which meant she wasn’t scared. Much.

“Hello, I’m Senior Mating Representative Hall. Congratulations on your match. I just have a few forms to complete before you two can get on your way and enjoy your new lives together.”

The Bellatani still glared, the woman blushed, and Grace flicked her finger across the desk to display the first—of many—form. “Now, sir, if you’ll place your palm here…”

And so it went. One couple in, ten thousand credits collected, one happy couple out. Over and over again.

She reminded herself she was happy for all the others who matched. Really, for the most part, she was happy. Except when she got home at night, said good-bye to her mother’s carer and then watched her mom sleep. Sleep that would be interrupted by bouts of coughing or bone-shaking shivers around one and again at four.

Last night had been bad and the morning hadn’t shaped up any better. To top it off, she had two long shifts. First at the Intergalactic Mating Agency and then she had to head to…

Dammit, they were going at it again. She should have remembered that about the race. The second they encountered their mate, it was all about getting horizontal and they didn’t care where or when. Vertical could work because many of their males were extremely strong. Plus, they had the extra arms thing going on.

Grace picked up the tablet and dropped it, the three of them repeating the same events from moments before. She ignored the hiss she received and kept her attention on the human woman. “If you’ll first place your palm here, confirming your willingness to mate with…” she glanced down at the now-flickering tablet. “Riz’ta Sico’rolqir, we can get you two out of here.”

Beings matched with off-worlders had to agree to leave the planet. No print, no mating.

The woman slammed her hand down, shaking the desk with the force, before plastering her lips on her new alien mate.

“Great, if you two have any questions, feel free to call the eight hundred—”

They vanished from sight, ignoring her completely.