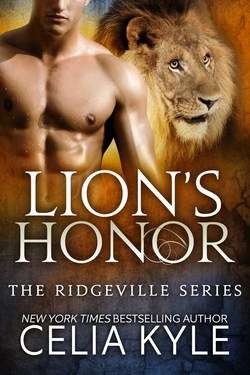 Sometimes the Queen of the Jungle needs to lean on her King. Okay, she’s really not the queen and he’s totally not the king, but damn it, they need each other.

Four years ago, werelioness Honor Mauer walked away from Ridgeville and hopped on a plane bound for London. She had college dreams and none of them included her pesky maybe-mate Grayson. (Even if he is the hottest thing to ever walk on two legs—and four.)

All is fantastically furry in London until she goes through her first heat. Then her world collapses, her bright, obnoxious eyes dim, and she runs home with her tail tucked between her legs. Too bad the London werelion who sent her scurrying home decides to show up just as she’s feeling a little less psychotic. Bastard.

Werelion Grayson got his curvy, luscious mate back on U.S. soil and he refuses to let her go. He knows there’s a lot of emotional work to do, but he didn’t become Ridgeville’s Second by turning belly up at the first sign of trouble. She’s his. The quicker she realizes that—and opens her heart to healing—the better. He’s got a plan for a life filled with love, laughter, and cubs and it sorta requires her cooperation.

Just when he thinks her recovery is around the corner, the male who’d hurt Honor shows up in Ridgeville. Which is a good thing, really, since it gives Grayson a chance to kill him. It’s like Christmas in July.

“I heard that fear eats the soul… As long as it doesn’t come after my ice cream, I’m cool with that. Who said I had a soul to begin with?” — Maya O’Connell, Prima of the Ridgeville Pride and woman who really does have a soul, but not much of one. She gave birth to the Devil’s spawns, after all. Er, she means her adorable, lovable, totally not evil twins, Easton and Weston. Right.

Ridgeville hadn’t changed in four years. At least, the airport hadn’t. The cracks in the tarmac outside Gate A were still present. A few weeds grew through the slender spaces and reached for the sun. A small dandelion peeked past the edge of one break, and Honor had the urge to pluck it from the ground and take it to Carly. The small wererabbit mated to Neal loved dandelions.

Of course, snaring the treat for the woman involved leaving the plane.

She wasn’t quite ready.

The scents of the pilot and flight attendant burned her nose, but they also intrigued her lioness. The man and woman were a mated pair, wererabbits from the Ridgeville Warren. But rabbits were not on the cat’s menu. That was a direct order from Maya, the pride’s Prima. And yet they still scented of prey and aroused the beast. The cat, still half broken and timid as hell, wanted to assert its dominance over those two. It wanted to be strong, able to care for itself.

Her cell phone rang, the soft song filling the Prime’s private plane while it also vibrated in her hand. She didn’t have to look at the caller ID to know who attempted to reach her. After sitting in the taxied plane for two hours and refusing to get out, she figured she should answer.

Honor swiped her thumb across the screen and brought it to her ear. “Hello.”

"Honor, how are you doing?”

She sighed and sank into the leather seat. Some of her tension, the worry and unease that’d chased her across the Atlantic, fled at the deep, masculine voice. “Prime.”

“Mm-hm. You feel like coming out?” Her Prime—Alex—sounded so calm. She wished she felt the same.

She swallowed and fought the rising panic in her soul. “I dunno.”

Now the panic shoved at her, pushed and struck her. “No.” She shook her head, even if he couldn’t see her. “No.”

“All right. Could you let the pilot and flight attendant go? Their kits are waiting for them at the sitter’s.”

She looked toward the small door at the front of the plane. The attendant had disappeared after Honor’s first snarl and flash of fang. The lion recognized them as delicious game, but she pushed down the need to chase them. They had children. Kits waiting on them, ones who called them “Mom” and “Dad.” She couldn’t tear them from the small ones.

“Yeah, okay.” She drew in a deep breath and cursed herself for the act. The rising fear from the pilot’s cabin teased the beast. “Lemme go in the bathroom first. Lock the door.”

“That sounds fine. Let me know when you’re there.” Alex didn’t seem the least bit stressed. He didn’t sound like a leader handling one of his edgy lions. A lion who was about to lose her shit inside his million-dollar private plane.

Honor rose and padded down the aisle, passing row after row of plush leather seats. All empty. It’d taken one call, a handful of sentences, and then her Prime sent for her. He’d facilitated her return to Ridgeville, and now waited patiently for her to deplane.

At the end of the walkway, she grasped the polished handle on the bathroom door and turned the knob. She slowly stepped into the small enclosure, fighting her cat with every flex of muscle. It snarled and growled at her, shoving its instinctual need to dominate forward. After what they endured, they wanted power, control. The animal alternated between regret at its part in what happened months ago and the urge to assert its power over others.

She tugged the door closed and flipped the lock. Before speaking again, she flicked the toilet lid down and then lowered herself to the surface. She stared at the steel-reinforced panel that separated her from the rest of the plane.

“Okay. Tell them to go ahead.” She swallowed the saliva pooling in her mouth.

The hushed whispers of the mated couple reached her. She couldn’t make out the words, but a new wave of their fear assaulted her.

“Prime.” Her voice shook with the effort.

“You’re not moving. Do you hear me, Honor? You. Will. Not. Move.” The words were a harsh order, her Prime’s displeasure and power imbuing every syllable.

The lion reacted, responded to their leader’s command, and immediately whined. It eased away, softly crying as it was pushed to the back of her mind. “Yes, Prime.”

Finally, the noises of their departure eased, and she didn’t hear a single sound. She was alone. Alone and safe.

“Can you come to me?” The gruff tone was gone, and he was back to the soothing, cajoling pitch.

“Maybe,” she whispered and stood, taking a single step to the door. She stroked the lock, fingers gliding over the shined surface, leaving fingerprints in her wake. “You’re alone?”

“Not a soul is at the airport, Honor. I gave you my word.”

He had. He’d promised no one would be around when she arrived.

She grasped the handle. A flick with her thumb disengaged the lock, and she turned the knob. The door swung open on silent hinges, and then he was there, Alex, her protector. “Prime.”

The cell phone slipped from her grasp, clattering to the carpeted floor. She didn’t hesitate, didn’t even pause for a moment.