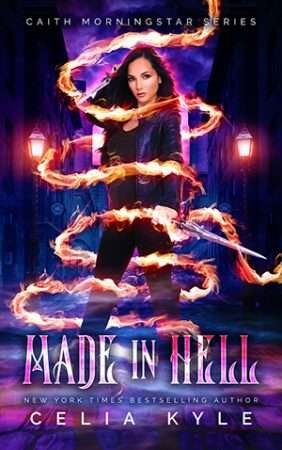 For the love of all that is unholy, I really thought the demons of the world were smarter than to screw with me. But they’re doing it. Again.  Catatonic people are being found across the city, all of them members of a new cult.  All the followers have to do is pray to their new goddess and all will be well… while she sucks the very life out of them. What makes it worse? The bitch involved my son in her schemes. Didn’t she learn what happens when someone touches what’s mine? I’ll be sure to show her.

Add in Uncle Luc’s arrival with his still pregnant baby momma along with a request to keep her safe, and my life is just awesome. (Total sarcasm.)

It isn’t long before I realize the “goddess” wants to destroy the world, and her ticket to the top is through the baby in the mommy-to-be’s belly.

Now I’m running, I’m killing, I’m saving the world, and I’m… trying to hang on to my angelic mate, Sam.  I’m pretty sure I’m going to fail at one of those. I just hope it’s not Sam.

I tossed back a shot of demonic moonshine, enjoying the scorching burn of the alcohol sliding down my throat. I licked the rim of the glass, capturing the last drop, and then slammed it down on the table. A spider web of cracks slithered up the side. It wasn’t the first time I’d broken that glass, and it wouldn’t be the last by the time the night was through.

I called for a flick of hellfire, just teasing the first circle of Hell, and used it to smooth out those fractures.  The move also sent the last tiny bits of alcohol bursting into flames, sparks of black and red leaping into the air.

Bonus, the ritual gave me a chance to recover a little. The stuff made my head spin like nothing else—the demonic part of the moonshine was literal, not metaphorical. It was brewed in vats heated by the flames of Hell itself, tainted by a touch of sulfur, and then seasoned with the screams of the damned.  Tasty.

It would drive mortals crazy if the scent even teased their noses.

It’d kill them if they actually drank the stuff.

The creature sitting across the table wasn’t any more human than me. Eh, probably less. I was technically one-sixth human. But since that bit came from my sword swinging, immortalized holy warrior from the crusades daddy… I’m not really sure how “human” that part really is.

My drinking partner—opponent—was part dem and part vamp. Maybe even a little dragon on the side since he had that vertical slit in his eyes thing going on.  Okay, I wasn’t totally sure and I definitely didn’t care. Because regardless, he had the stamina of a demigod and there weren’t many who could drink him under the table.