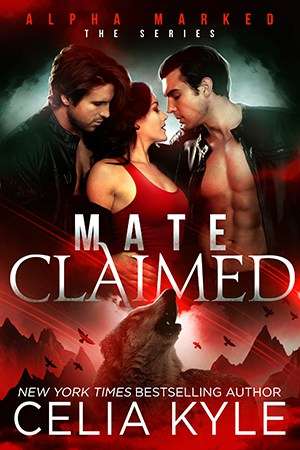 Thirty and single? Well, getcha ass to the Gathering!

As if hitting thirty wasn’t enough, unmated Scarlet Wickham is summoned to this year’s Gathering. As a woman Marked to be the mate of an Alpha pair, she’s not going to find happiness anywhere other than in the arms of two Alpha werewolves. So, off she goes with her sisters in tow. ‘Cause yeah, she’s one of the plump Wickham triplets, and they’re all being carted off to werewolf speed dating.

Keller and Madden, Ruling Alpha pair, can’t believe their luck. They’ve found their mate, and she’s more than they could have ever hoped for. She’s feisty with spirit to spare, and lush curves that they want to trace with their tongues. They can’t wait to solidify their bond and get to know the beautiful woman who is to rule at their side. But first, there’s the minor inconvenience of a challenge to the death…

The invitation had appeared bright and early, popping onto her counter the moment the clock had struck 8:01 A.M. and she’d officially hit thirty.

She glared at the pristine page, at the cream linen that boasted the handwritten words requesting her attendance at the coming Gathering.

She glanced at her scorched sink, frowned and wondered if steel polish would remove the marks. That thought brought her back to the idea of burning the invite and she wondered if the local witch could help her out. Maybe…

The shrill ring of her phone busted in on her illegal wonderings. If she were honest, which she didn’t want to be, she had already broken the law by attempting to burn the stupid paper. Having a Mark meant she had to adhere to the same rules that governed the furballs. So, no circumventing a wolfy summons. Even if she wasn’t a wolf.

With a sigh, she abandoned her spot at the counter and snatched up the phone. Holding the handset between her cheek and shoulder she greeted her caller. “Heya.”

The caller screamed. Scarlet took a peek at the microwave clock. 8:14 A.M.

“So, you got your invite.” She smirked, kind of glad she wouldn’t be the only one forcefully attending the upcoming annual Gathering.

Scarlet was one of three, the first-born of the Wickham fraternal triplets. Each of them as different from the other as the stars in the sky. Thankfully, it’d only be her and Gabriella attending. The third, Whitney, had been born sans the necessary birthmark, so she wouldn’t be receiving the mandatory summons. Lucky bitch.

Scarlet eased her ear from the handset. “Apparently, they can.”

She wanted to say “duh”, but refrained. They should have been prepared for this, should have had some sort of plan. Like, Operation: What the Fuck to do When Forced to Parade Ourselves in Front of Mate Hunting Wolves When We Hit Thirty. Instead, Scarlet had pushed the eventuality from her mind, conveniently forgetting that particular law. Apparently, Gabby had done the same.

She fingered the unmarred invitation. “I’m pretty sure Mom covered all this during the whole ‘What to Expect When You’re Marked’ lessons.”

“Quit being rational and logical,” her sister snapped. “I’m too busy for this, Scarlet. You need to do something. Go…do what you do.” She imagined Gabby waving her hands around, fingers fluttering, and she smiled. Her sister in a tizzy was something to watch.

Her mongrel cat Burger came sneaking over and twined around her ankles. While listening to her sister rant and rave at the injustice of their summoning, she fed her sweet boy. Scraping out the rest of his organic, homemade cat food, she stood and placed the empty container in the sink. She’d have to make him more food for the pet sitter before she flew out to the Gathering. Mentally, she ticked through the contents of her freezer. He tended to like the shrimp and salmon more than—

“Are you even listening to me?” Gabby’s screech nearly blew her eardrum.

“Not really.” She stared down at Burger. “Do you think I’ll have to get rid of my cat?”

The thought poked at her heart and deflated it. She’d rescued him when she first graduated from college. It’d been her and Burger against the world.

“Scarlet!” She heard her sister panting and gasping with rage.

Scarlet understood Gabby’s feelings, sensed her sister near the edge of sanity, and there wasn’t a damn thing she could do about the situation. She was as freaked-the-fuck-out over the slip of paper as her sister, but she dealt with things with humor. Humor few people appreciated.

They’d both been born with a Mark, a symbol of their inevitable mating to Alpha wolves.

Women in the Wickham line had been partnering with the furballs for as long as they could remember, though not necessarily every generation. Their mother hadn’t been Marked and had happily settled with a lovely human man. But two out of the three triplets had been born with the three-pointed, spiraling symbol. Looking more like a scar than anything else, the Mark was slightly raised and a hint darker than her natural skin tone.

So she and Gabby would be mating a pair of wolves. Subconsciously, she’d been waiting for the invite. Once a Marked woman hit thirty and was still unmated, the Ruling Alphas summoned the ladies to the annual Gathering to meet Alphas from outside the female’s hometown.

Sniff-sniff. Am I your mate? No? Next!

The Alpha pairing could form at any time. Once one wolf recognized a power that matched his own in another wolf, they bonded. From there they either formed a new pack or took over another. She was sure there was more secret furball mumbo jumbo involved, but that was the extent of her non-mated knowledge. Oh, she’d asked, and her mother had said: “You’ll find out when you’re mated, dear.”

The problems with Alpha pairs arose from the fact that both were controlling and dominant as hell. Which is where the Marked came in. The ladies acted as the balance, the one who kept the two calm. Sure, the guys could rule without one; the world was just better if they had a mate at their side. Less bloody, too.

She took a deep breath. She’d have to travel and meet some wolves. If she found her Alphas, group sex would occur, one male in her pussy and the other in her ass, some scar-inducing biting, and voila, mates.