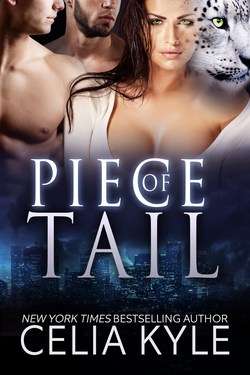 Gina's got a problem. Okay,  she  doesn't think it's a problem, but the pride that kicked her to the curb sure does. In fact, she feels purrfect in every way. With curves in all the right places and an attitude that just won't quit, Gina’s got it all. And then some. Now about her tail… In her mind, it's just an added bonus. But in the minds of the various prides, her ability to only grow a tail proves to them that she's not were enough, whereas she’s just a bit too kitty to be considered human. Good thing she's found two men who can't get enough of each other, her, and her tail.

This was totally against the handbook. One hundred percent. Maybe not in so many words, but Patrick was sure fucking his lover in his office probably wasn't the best idea in the world. Anyone else and they'd be gone in a heartbeat. Damn, it was good to be on top. In more ways than one.

"Patrick.” Daniel snapped. “Are you even listening to me?"

Patrick pulled his mind from his fantasies and focused on his lover, and business partner, Daniel. “Of course I am and of course, I disagree.” He smiled at Daniel's growl.

"She won't go for it.” Daniel swallowed hard and Patrick imagined licking his way up his lover's throat. “Why would she?"

Damn, but his boyfriend could be as insecure as a woman at times. With a sigh, he levered himself from his comfortable position on the couch and strode to Daniel, wrapping him in his embrace. “Because she wants you… us.” He squeezed the other man's shoulders. “She watches us, Daniel. You aren't in the office as much, but I swear, she watches our every movement as if she were a starving snow leopard and we are walking, talking steaks."

Daniel looked at him, eyebrows scrunched, nose wrinkled. And Patrick couldn't resist the man any longer. He brushed his lips across Daniel's, inhaling his lover's scent and relishing the musk of his skin. Daniel opened for him with a moan and turned in Patrick's arms, pulling their bodies together chest to chest. In less than a second, Patrick's cock went from interested to rock hard and, not for the first time today, he imagined bending Daniel over his desk and taking his lover from behind.

Patrick released his hold on Daniel's shoulders and shifted his grip to his lover's hips. He dug his fingers into the other man's cloth-covered skin, pulling and pressing their bodies together, gaining the friction he craved. He rocked his hips, grinding his erection against his lover's and smiled against Daniel's mouth when he moaned.

His dick ached and throbbed in time with his heartbeat, pulsing and thrumming a mile a minute while their tongues dueled for dominance. Patrick moaned and pressed harder when Daniel fisted his hair forcing him to relinquish the man's mouth while the tiny sting went straight to his cock.

"Patrick.” His lover growled, forcing his name through clenched teeth.

Patrick leaned forward, stealing another nip at those tempting lips. “She does, Daniel. You want her. I want her. As fucked up as it sounds, I think she wants us as well.” He couldn't resist, he ground his cock against Daniel's, eyes closed and panting as his body trembled.

Daniel's head fell forward to rest on his shoulder and the other man sighed. Patrick resisted the urge to shout in triumph, knowing he'd won. “I don't…” His normally straightforward lover paused and Patrick hugged the man's shoulders once again.

"It'll work, D. I swear it. She's so…” It was his turn to sigh. “Gina is the epitome of everything we've ever wanted in a woman. You know it. I know it. Why can't we just see how she feels?"

Daniel raised his head from Patrick's shoulder and he brushed his thumb over the man's cheek. “I barely know her, Patrick. She barely knows  me. How can you think that…”

Patrick cut him off with a quick, bruising kiss. “We'll just fix that right now, won't we?"

Daniel sputtered and protested, but Patrick ignored his bluster. The man was hard as a fucking rock, harder than he'd probably been in years and no amount of arguing was going to deter him now. Daniel wanted a relationship with Gina just as much as Patrick did and nothing short of her refusal would keep him from making their duo into a trio.

Victory was within reach and he'd be damned if Daniel's insecurities would rob them of what could be the ideal life for them. Sure, there'd be two husbands and one wife, but who was counting?

Sensing a presence behind her, Gina saved the file she'd been working on and turned to face her visitor. Strike that, visitors.

Damn her to hell and back again… The two finest pieces of non-shifty man-meat were standing at the entry to her cubicle and the only thing she could think was  yum.  Smart, real smart.  She almost snorted, but bit her lip instead.

Her ears perked up at the low moan coming from the man standing just behind her boss. Daniel, Danny-boy as she sometimes called him in her mind. Maybe he wasn't feeling well. Taking a closer look, she saw a fine sheen of sweat along his brow and felt bad about ogling him when he obviously wasn't feeling hot.

"Gina,” Patrick's deep voice yanked her attention from the boss’ boyfriend and back to the man who hired and fired. She pasted on a smile, waiting to hear what the “big guy” had to say. She hadn't fucked up in a while… Okay, if she was honest… It'd been like, a whole week, since she'd gotten into trouble. That was truly a record for her.

Patrick glanced back at Danny-boy before he continued, tugging at his collar. Dang, the boss man was nervous.  So not good.

"Gina, Daniel and I were wondering… Wondering if you'd like to have dinner with us? Maybe tonight?” She opened her mouth to respond, but shock kept the words from leaving her mouth and Patrick kept going. “Maybe tonight is too short of a notice. Friday, maybe? Daniel and I… Wait, you know Daniel, right?"

Her boss turned to his boyfriend and tugged the man forward. Poor guy looked green around the scruff and like the last place he wanted to be was in her cubicle.

Though nervous, sick and sweatiness aside, the man was truly a gorgeous hunk of fucktastic meat.

Both men, side by side, were more than her inner-kitty could stand. The base of her spine tingled, right along with her pussy, as arousal thrummed through her veins.