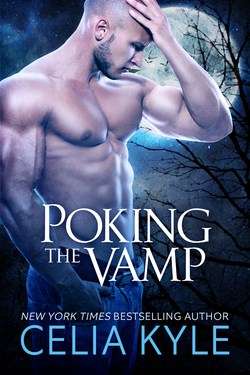 Kate saved him from dying (Again? He’s a vampire. She has no idea.) and Joce saved her from dying (by killing her). When she awakens as a vamp, she’s not sure it’s an even trade.

Joce Magli, vampire and Knight Protector, thinks of humans as food and nothing more.  Until he meets Kate—doctor, savior, and most delicious woman he’s ever tasted. And don’t get him started on all her lush curves… She is his and when circumstances force his hand—when it becomes a choice between life and death—he claims her forever.  Kate is his fire, his vampire mate, and then she’s actually on fire and there is the half-God trying to strangle her and… yeah, it’s been a bad day.

And it’s only going to get worse.

A hospital emergency room was not the place for an eight hundred-year-old vampire. Ever. It didn’t matter that Kate was related to the woman currently standing in the middle of the emergency room, looking as if she’d just stepped off a Paris runway. She was still a vamp in a building filled with injured humans.

Dog tired, feet aching, and body pushing through her fatigue, Kate Bennett slowly made her way toward the statuesque woman. Before seeing the vamp, she’d looked forward to finishing the last two hours of her shift and then she had a date with her BFF that included waffles and then a night in a warm bed. Alone. Lola was her BFF but they weren’t that close.

Until she saw Galla.

All hints of exhaustion fled as adrenaline spiked in her veins.

Kate hadn’t anticipated seeing the woman for at least another six months. Like clockwork, Galla appeared on her doorstep on Kate’s birthday. Typically decked out in the latest European fashions and layers of jewels. She would blow into Kate’s home, make herself comfortable, and then they’d exchange blood. Well, Galla would prick her finger and give a droplet to Kate.

This timeless woman was two things to Katherine: 1) her grandmother many times over (ages were never ever discussed) and 2) a vampire. Vampiress? Regardless of what she was called, she’d long ago charged herself with looking after the Bennett family line. For some reason, she focused on Katherine in particular.

Galla had never given her a definitive reason as to why. But the woman had fangs so Kate wasn’t about to push. She also never understood why giving her a droplet of blood each year kept her “safe.” Galla’s words, not Kate’s.

Of course, she wasn’t sure she wanted to know what was in the world that could threaten her.