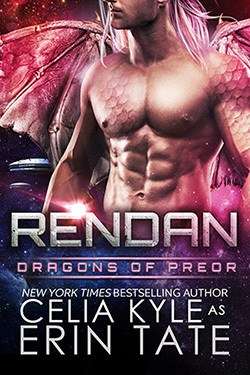 Violence is never the answer… unless you’re a Preor warrior.

Rendan sen Tarkan, Offense Master to the Preor Third Fleet, has found his human mate. She is small compared to him, but her curves, delicious scent, and sky blue eyes call out to his soul. He has waited for a female for over two centuries and he will fight—kill—any who dare attempt to take her. Even one of his own males.

One moment Carla was unemployed and the next she was on the Preor battleship, working as a nurse for human-Preor mates. Oh, and the next moment? That was when she found her sexy, alien pink-scaled mate. Then she watched the muscular dragon shifter get beat to hell. And then she was assigned a condo in Preor Tower on Earth. The person in the condo next door? That sexy, alien pink-scaled male.

Learning about the proud alien warrior isn’t trouble free, but it’s easier than almost dying. Yeah, almost. But the Preor who tried to end her life? Well, he doesn’t quit easily. She only hopes Rendan is there to save her when the alien tries to end her life once again.

In many ways, Carla was a pushover. A good glare could send her scurrying away, and a solid frown would have her backing into a corner.  She didn’t even want to think about how she reacted when someone yelled at her.

She was not a pretty crier.

But under certain circumstances, she had a backbone of steel. Specifically, when she worked on a patient. When she gloved up and got her nurse on, she was all business and absolutely zero patience.

Wait, that was a lie. She was the liarest of liars. She had to amend those ballsy thoughts. Oh, they still applied—most of the time. Just not when she was on a Preor ship surrounded by Preor warriors—big, winged, deadly, highly skilled, dragon-shifting, Preor warriors.

And at the moment, her definition of “surrounded” meant two—two Preors.

Healing Master Whelon stood behind her, peering over Carla’s shoulder while she worked.  The massive, gray Preor was nice… but massive.  Silver hair, tanned skin, and wide-spreading wings accented his size. They combined with his broad, bare chest and clinging katoth—similar to Earth leather—pants. The fact that his coloring was similar to the ship’s walls just added to his imposing presence.

He’d never done anything to her—never shouted, glared, or snarled. He’d been nothing but gracious and overjoyed when she’d joined the Preor staff as a nurse specifically meant to care for the human-Preor mates onboard. That couldn’t banish the fear, though.

Fear of large men and the damage they could cause.