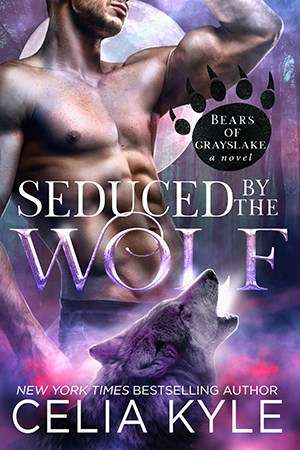 Werewolf Reid Bennett has one goal: investigate the Brookfield clan’s Itan. Reports are coming in that the male is abusing his werebears and--even if he’s a werewolf--Reid will put a stop to it. Unfortunately, the resolution ends up being permanent and now Reid’s the clan’s leader.

The only positive about his new situation: curvy werebear Evelyn Archer. She makes his wolf howl and he aches to explore every inch of her lush frame. He’s the clan’s leader and he knows exactly where he’d like to lead Evelyn—his bedroom.

Evelyn doesn’t know what to do with Reid. Sure, he’s the sexy wolf her werebear wants to nibble and claim, but she has bigger issues to deal with. Such as the fallout of her father’s death… at Reid’s claws.  Okay, maybe she can take a break for one little lick...

They both have plans for the Brookfield clan… and each other. Except there’s a small problem—someone wants them dead. Nothing new for Reid, but a threat against Evelyn is unacceptable. When it comes to Evelyn, he’ll break all the rules to keep her safe, including dusting off his homicidal tendencies again.

Reid really wished he had a smoke. Or a drink. Damn, a drink would have been nice. Just a shot to soothe his nerves a little. Unfortunately, his therapist—in another bid to get him to calm down—decided drugs would mask the problem.

Since when did beer and smokes become drugs? It didn’t matter. Mainly because his wolf was even more pissed than normal at not having its beer and smokes. How’s that, Miss Therapist?

He should take a picture of what happened when he didn’t get his “drugs” and text it to her.

Sometimes a patient takes two steps forward and one step back, Mr. Bennett.

A dead body? Huge step back.

Nothing for it, he was gonna have to call it in. The question became, who did he get in touch with first? His therapist since she wanted to be his number one go-to person when he had an “episode” or his boss Terrence, the Southeast werebear Itan?

Considering Reid was a wolf and he’d killed a bear…

With a sigh, he dug in his pocket and tugged his phone free. He sought out Terrence’s number and then tapped the contact. It rang once… twice… and then the male answered.

“Aren’t you merry fucking sunshine this morning?” he couldn’t help goading the bear. The Southeast Itan may have helped him out of a tough spot—taken him in when the Southeast Alpha kicked his ass to the curb—but that didn’t mean he couldn’t give the male shit. Pack or not, Reid was still as alpha as they came. Submitting to a bear just wasn’t in his wolf’s skillset.

Killing though… He nudged the bloody body with the toe of his boot.

Take out one bear before sunrise and everybody thought he was some sociopathic murderer.

All right, it’d been a pack, one whole pack, that day, but the assholes screwed with his family—and then covered it up. Wolf didn’t particularly care for that and showed ’em.

Maybe he was a sociopathic murderer. But if he was, was this murder really on him? Terrence knew he was a fucked up piece of work. If anything, the death of this bear was on his shoulders, not Reid’s.

Now he was thinking like his half-sister and the woman’s best friend.

“Reid,” the other male snapped.

“You called me. What do you want?”

Right. Wolf hated being challenged. Sorta why he was in this situation.

“You sent me here to Brookfield.”

“Your wolf and I came to an agreement, and it’ll get over it until we meet again. What. The. Fuck?”

“Kiss your kids with that mouth?” Now he grinned because giving him shit about cursing around his half-grown children was fun as hell.

“Reid.” The tone, the way the r rolled off his tongue and ended in that rough d told him he should quit playing with the bear.

“What kind of problem?”

Reid stared down at the male before him. He took in the guy’s size, ignoring the deep wounds that cut to the bone as well as the shallow cuts that marred his chest. Those were from when he’d just been playing with the bear, showing him he shouldn’t mess with his wolf. Pure fact, at the best of times his beast didn’t like being challenged. Without beer and smokes? Like was no longer in his vocabulary. Loathed though… That was a little more accurate.

The wolf did some good work on the man’s legs. One long stripe from hip to ankle. Nice and clean. Part of him—way down deep and almost forgotten—experienced a twinge of regret. Not a big portion, but there was something.

Then he remembered who threw the first punch. And the second. Then the third strike was a kick.

Reid warned him good and hard before he retaliated.

Making a big mistake here. Stop now and walk away. Keep this up and I’ll own all your shit in the next fifteen minutes.

“Problem’s about six-two, six-three. Between two twenty, two hundred fifty pounds. Hazy on that since there’s a shitton of blood on the ground.” But that sounded about right. Head wounds bled like a bitch. Thinking about bleeding had him looking over his own body. He had a nice set of claw marks down his chest, but it was just a flesh wound. His wolf took care of in no time. His biggest concern was his shirt. He liked that shirt.

Terrence sighed and Reid imagined the male was sitting at his desk, leaning back in his chair, and pinching the bridge of his nose as he stared at the ceiling. He’d seen the position often enough. Mainly when Reid had done something. “Tell me it isn’t the Itan.”

“It ain’t the Itan,” he immediately replied. How should he know? It wasn’t like he checked the bear’s ID before the dick took a swing at him.

“No.” He shrugged. Wolf didn’t care who stepped up. Just that it wouldn’t back down.

“Can you please verify his identity for me?” The words were hissed into the phone and he knew Terrence was gritting his teeth.

Reid rolled his eyes and bent down, shoving his hand into one pocket and then the others until he found what he was looking for. “I have Patrick Archer. Huh, guess it is the Itan.”

“Not my type, but thanks, boss man.” He grinned.

“You’re not taking this seriously,” the bear snapped.

Reid tossed the wallet onto the male and then clenched is free hand into a tight fist. “When I found him trying to rape a twelve-year-old bear, I took it very seriously. When I stopped him and that asshole tried to take my head, I took it very seriously. Calling you, looking at that piece of shit and wishing he was alive so I could kill him all over again… Yeah, my wolf is feeling fucking serious.”