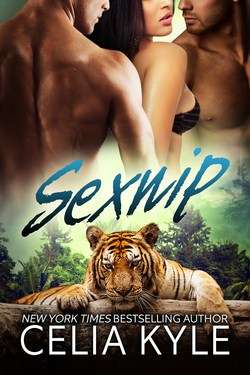 After being fired, again, for her obsessive-compulsive tendencies related to cleaning, Katerina Pawslowski is on the hunt for a new job. Who knew that having good personal hygiene could be a terminable offense? Maybe keeping half a dozen containers of Clorox wipes always at hand was a bit much… As she’s searching through the paper for a job, an ad from Heart’s Haven Toys catches her eye.  Lab Assistant Wanted: assistance with maintaining and cleaning the general lab area.  Cleaning! It said cleaning! What better job for a feline shifter with OCD?

Wilmington Thorpe III has got a problem. He and his partner have been hired by Heart’s Haven Toys to create the ultimate catnip. Catnip which would stimulate and arouse the feline shifters of the world. Heart’s Haven is looking to monopolize the market on feline sexual aids and this new creation would be the cornerstone of their marketing campaign.

After several unsuccessful attempts, Will decides his problem is the state of his lab. His partner and pack mate, Montgomery, while an amazing chemist, is a slob. Will can’t think with all the clutter!

Montgomery Slade loves everything about working for Heart’s Haven Toys. He’s doing what he enjoys with the man he loves by his side. His life couldn’t be better–until formula after formula fails to produce the results they’ve been looking for, and as a result, Will spends more and more time in the lab staring at test results…and less and less time keeping Monty warm at night.

Of course, everything changes when a certain  Kat  gets to cleaning…and changes their lives forever.

The enemy lurked. It seemed scattered everywhere she looked. It couldn’t be escaped no matter where she turned her attention. Kat tried to shut her eyes, shut out the sight before her, but she couldn’t. Every shift and twinge brought her in contact with the horrid stuff.Dirt, dirt everywhere and not a drop of Clorox in sight.

Kat eyed the chair and fought the shiver racing down her spine. No way. The receptionist had told her to have a seat because she’d be waiting a while, but Kat would rather stand. She’d spent over an hour making sure her clothes were free of dust and lint. She wasn’t about to dirty herself now by sitting on a chair that didn’t look as if it had seen any type of disinfectant in  years.

True, to the casual observer the reception area appeared clean, but Kat had a sixth sense when it came to germs and dust. She could  feel  them aching to get their grimy hypothetical hands on her. Some would classify her as suffering from severe obsessive-compulsive disorder. She preferred to think of herself as someone who liked being clean. Plain and simple.

Kat slid her hands over her hips, smoothing the lines of her skirt as she begged her nerves to calm. She needed this job.  Needed it.  Needed it the way dogs needed to pee on every tree within their vicinity–maybe even more so.

Lost in her thoughts, she started when the receptionist called her name. “Katerina Pawslowski?” Kat turned toward the voice. “Mr. Burnman will see you now.”

She followed the petite woman down a short corridor. The entire time she remained conscious of their differences, not just in height, but in width as well. Her heels sunk into the plush carpet with each step and at one point, Kat had to steady herself by touching the wall. She wasn’t a girly-girl who normally wore high heels, but when interviewing with Heart’s Haven, a woman did what she had to do. Even if what she had to do was don a way-too-expensive suit and three-inch heels.

The receptionist turned down another corridor and Kat followed, surreptitiously tugging at the neck of her blouse and blowing cool wisps of air over her chest. The farther they walked, the hotter it seemed to become. She’d never been known to grow overheated when nervous, but there was a first time for everything.

Finally, they stopped in front of a large metal door and the woman she’d been following eyed her carefully, one perfectly waxed brow arched. “Well, you made it this far.”

Kat didn’t understand the woman, but didn’t question her. The receptionist opened the door and Kat’s breath rushed out in a wheeze as a great burst of heat rolled over her. She clutched the doorframe to steady herself and yanked back her hand with a spitting hiss. Hot, burning hot. Her palm reddened before her eyes and she glared at the receptionist. “What’s going on?”

The woman shrugged and turned her attention to the room before them. “Thank you, Draco, I’ll be interviewing Miss Pawslowski in my office if you desire anything.”

“There are many things I desire,  kalushka.” The growling, rumbling voice nearly stopped Kat’s heart.

Kat didn’t have a chance to look into the room to investigate the deep voice that had her pussy creaming in delight. The receptionist pulled the door closed and strode past Kat in a blur of motion. The woman wasn’t human as Kat had originally guessed. No human could move that fast.  Well, it seemed the rumors about Heart’s Haven may be true after all.

Sure, she’d heard the rumors that Heart’s Haven Toys was owned and operated by paranormal creatures, but since she didn’t really run in the “normal” para circles, she had only guessed she’d (with her furry tendencies) be welcomed.

The receptionist, who Kat was beginning to believe wasn’t  really  the receptionist because of the way she seemed to carry an air of confidence, led her into an office. Thankfully, the room felt cool compared to what she’d endured only moments ago.

“Have a seat, Miss Pawslowski, and we’ll continue on with the interview.” The woman gestured to a nearby chair.

“Continue?” Kat sank into the plush chair with as much grace as she could, which wasn’t much.

“Yes, continue. My name is Madeline Windfire. I am the para-human resources liaison for Heart’s Haven Toys. One of my tasks is to ensure that the individual hired is adequately equipped to work for Heart’s Haven. While we have many humans in several different capacities, a paranormal individual was specifically requested for this position.”

Kat’s head spun, but she managed to understand and process most of what Madeline had said. “So, that was to make sure I wasn’t human?” she asked, incredulous.

“Of course. No human can tolerate the heat just outside of Draco’s office and they definitely can’t handle the blast of hot air that emanates once the door is opened.” She smiled as if it all made perfect sense.

Well, it didn’t! Kat wasn’t raised around all of this paranormal stuff. True, she got furry every now and again, but  no one else  did. Talking about her abilities and whatnot was just  notnormal.  That’s why I’m called  paranormal,  idiot.

Madeline smiled in return, revealing white, gleaming teeth with incisors that were just the teensiest bit  long.  “Now we’ll discuss your qualifications, the job and any personal needs which would have to be met should you become employed with Heart’s Haven Toys.”

Kat nodded. “I’m very efficient with cleaning, which the ad mentioned as one of the job duties. Organization and cleaning are actually my strengths.”

Struck dumb by Madeline’s ability to discern Kat’s true nature so easily, she took a moment to respond. “Yes, I am.”

“So humans would consider you an individual suffering from OCD.”