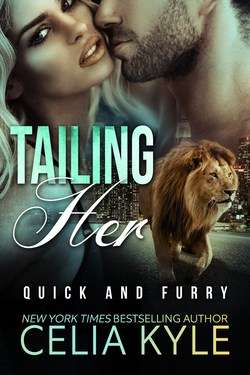 Jennifer Palmer doesn’t have time for a mate. Yes, she’s a werelion whose beast is all about sexing up the hot beta, but she’s in the middle of prosecuting a high profile criminal case. Her primary responsibility is to see the bad guy ends up behind bars. Scratching her mating itch and screaming Brett’s name as she com—ahem. That isn’t anywhere on her list of to-dos. What she doesn’t realize is her werelion mate’s primary responsibility is ensuring her safety from the bad guy and… making her scream his name.

Jennifer Palmer growled into her phone at her best friend, Penelope Little. No, wait, her BFF was now Penelope Tolson—mate to the North American Alpha. She should probably be all respectful and shit. Too bad Jennifer’s respectful bone was broken.

“Look, Pen, I get what you’re saying, but I’m fine.” She raised her hand and waved, hoping to catch the attention of the passing cabbie. She was due in court in fifteen minutes, and she still had to get across town. Between waking up late, taking forever to get dressed, and arguing with Penny on the phone, Jen was super late.

“Yeah,” Penelope snapped. “Everyone is fine until they’re dead.”

Dead. Everyone was so worried about her life. Or rather, her remaining alive. One high profile case, and suddenly Jennifer was on everyone’s mind. Her brother, alpha of her and Penelope’s old pride seem to be calling every ten minutes. And if he wasn’t calling her, Penelope was on the phone. Then there was Pen’s mate, Marcus, checking on her constantly.

Each of them had the same concern—finding Jennifer dead in a ditch.

They also had the same answer—giving Jennifer a bodyguard.

She was a werelion, for goodness sake! She could protect herself. God gave her fangs and claws, didn’t he? Of course that thought had her remembering Marcus’ last words… “What good are fangs and claws against a bullet?”

Maybe they couldn’t do a damn thing, but that didn’t change the fact she was still a werelion with the ability to heal much faster than a human.

“Are you listening to me?” Penelope shrieked.

“Uh, sure. Totally.” Jennifer was so not listening.

A bright yellow cab screeched to a stop beside Jennifer, and she snared the handle to the door. She yanked it open, and quickly slid into the backseat, nearly dropping her phone. “Oh, I totally agree with you.”

She hoped they were talking about paint colors for Penelope and Marcus’ apartment. Or rather sky high palace. Penelope had moved up from the tiny old apartment she had in their hometown to the penthouse of the tallest building in the city. The two had offered Jen a place in the same building, but she’d refused. She left Ryland on her own, and she’d make a home for herself in the big city on her own.

Penelope released a high-pitched squeal. “Oh, I knew you’d see sense! I told Marcus you would, but he wouldn’t listen. I totally won that bet.”

The cab jolted to a stop outside the courthouse, and Jennifer shoved cash toward the driver before she climbed from the interior. Her heels clicked and clacked as she rapidly raced up the stairs. “Yeah, you won? So happy for you.” She distractedly replied. “What was the bet?”

Her shoes slipped on the polished floor of the lobby as she dashed around the corner. The metal detectors were just ahead, and she sighed in relief that the lines weren’t too long. A glance at her watch showed she had three minutes to get to the courtroom and she couldn’t be late. The judge was fair but a hard ass, and she’d worked so hard on this case that the last thing she wanted was to fuck it up. Or give the opposing counsel a reason to request a mistrial.

“Penelope?” Her friend still hadn’t answered her question. “What was the bet?”

Jennifer’s destination was in sight, and she groaned when she saw the news vultures surrounding the entry to the room. Everyone’s gaze swung to her as she ran toward them, the flash of light and cameras confirming they’d spotted her.

“Look, Pen, honey… I need to cut this short. Court is starting any second now, and I gotta make it past the media jackals.” A couple of those jackals moved toward her, microphones extended and cameras intent on her. “I’ll call you as soon as I’m done for the day and we can talk about that bet, huh?”

Jennifer was no longer listening because one of the reporters wasn’t a reporter. He wasn’t holding a microphone or a tape recorder. No, he was holding a gun. Black and compact, it blended in with everything the others waved around and she didn’t spy it until it was almost too late.

She immediately dropped her cell phone and stumbled back a step, fingers flashing to claws without thought and her fangs descended in an instant. Right about that moment, she realized Marcus may have been right. Fangs and claws might not be a good defense against a speeding bullet.

The bright flash that came with the pulling of the trigger and release of a round was immediately followed by the loud boom of the gun firing. It echoed off the marble walls, and the reporters—the real reporters—ducked. Jennifer tensed to do the same, but she shouldn’t have bothered. Because at that moment a large body plowed into her. The stranger took her to the ground, his weight forcing her against the floor, and they both grunted with the impact. Another echoing pop reached her, which was immediately followed by another grunt from the person atop her.

The person atop her…

Snarls and roars bounced around the hallway and those were followed by shouts from courthouse security. It was obvious the gunman was either captured or being pursued by others.

Which left her with the person atop her. Jennifer breathed deeply, and the scent of the dry plains struck her—the aroma particular to a specific species. So, not a human or warlock. Definitely not a vamp—he scented very much alive—nor a werewolf. (None of that wet dog smell.) No, she’d been tackled by a lion. Not just any lion, but one particular lion. Her mate.

Her mate who was… a coppery tang filled her nose… bleeding?