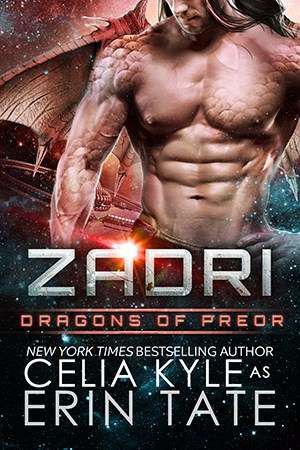 What’s a single, pregnant woman supposed to do when her family kicks her out? Go to Preor Choosing Station Tau and hope a dragon shapeshifting alien is her mate, of course.

Delaney Cole found her mate among the Preor only to watch him die—through his own eyes thanks to the Knowing.  Now, what’s she supposed to do when she discovers that her second mate is the male who’d killed her first?  It doesn’t matter that he’s gorgeous, that his peach scales invite her touch, and his thick muscles make her fingers tingle with the need to caress him.  She shouldn’t want such a violent, deadly male, but… she does.

Zadri was born a son of Syh, orphaned and unwanted, and he never imagined actually having a mate.  Yet, Delaney is his. Yes, he was the one to rip out her first mate’s throat, but now that he has experienced the Knowing with her, he will not let her go. Her lush curves, inner strength, and unborn young belong to him—wholly and until he takes his final flight.

When others attempt to rip her from his life, he will explain the gravity of their error. Slowly. Painfully. He only hopes he can reach her before they escape.

Zadri wondered what terrors plagued the small female before him. She thrashed on the medical platform, her small arms tugging against the firm restraints around her wrists. He mentally snarled at their presence but could not deny their necessity.

The woman whimpered and jerked her right arm, fist only raising a few inches before relaxing back down to the soft surface beneath her. She turned her head so quickly her dark hair followed the movement, hiding her face from his sight. That same snap came again, allowing him to see her once more.

Allowed him to see her delicate nose, the tip rising ever-so-slightly. The fullness of her lips, lips he ached to taste. Her face was slightly rounded yet her cheeks appeared hollow, a sign of her need for sustenance though he did not believe she’d wanted for long. The elegant line of her pale neck, skin so light he could see the slight blue-green tint of her veins.

Zadri did not allow himself to focus on her breasts, a hint of shame filling him for lusting over a female that was not awake.

A female that did not belong to him.

He did let his stare wander to the mound of her belly, the roundness not caused by what humans called fat but by a dragonlet. No, that was not correct. Humans called their offspring children.

The offspring inside this female was human and considered small according to Human-Healer Butler—the human-Preor mate of another warrior. He wondered if it was due to the woman’s hunger and difficulties, or if the child’s sire was merely weak.

Though all human males were considered weak. None on Earth were stronger than the Preor—especially not humans. He decided the diminutive shape was its sire’s fault.