They’re werewolves—fierce, dangerous, deadly, and… hunting for their mates.
Grab the entire bestselling, scorching hot Real Men Shift series in one boxed set and save over $10!
Real Men Howl - Mason Blackwood’s inner wolf will go crazy without her. Lucy thinks he’s already crazy. Werewolves aren’t real. Right?
Real Men Snarl - Ally doesn't want to have anything to do with werewolves. Kade Blackwood is a werewolf who wants to do everything to Ally.
Real Men Growl - Gavin Blackwood expected gratitude, but what he got was a gorgeous she-wolf who defied him at every turn.
Real Men Scratch - Who knew getting kidnapped could be so fun?
Real Men Bite - His wolf wants her to submit. She wants him to heel.
Real Men Claim - He lost it all… until he found her.
Real Men Hunt - She's willing to sacrifice anything to save Wolf Woods from developers—including love.  He refuses to let her.

Shifters and witches and vampires, oh my! Grab this first in series set of stories sure to trip all of your paranormal romance-y goodness triggers. From shifters to vampires, there's a little something for every paranormal romance lover inside the pages. From werewolves to weredragons to gargoyles, we've got you covered. Over 150,000 words of alpha males with mates on their mind. One-click the Real Men Romance boxed set today!

His Fiery Kiss - She’s looking for a story. He’s hunting a criminal. Somehow, she’s become both.

Witch in Charge - It's all fun and games until Kelly's gargoyle statue turns into a real man...

Vampire Seduction - He’s accused of a crime he didn’t commit and she’s determined to get him off… in more ways than one.

Wren is determined to have an adventure this holiday season, but no one mentioned she might find her mate!

Chafing under the watchful gaze of her overprotective big brother, Wren Oberon had to use all of her fae powers to get her sneaky-sneak on so she could attend the holiday party of the year at Othercross. Now she finds herself in a compromising position with no help in sight—until some random wolf shifter comes to her aid in a most dramatic fashion.

When he claims to be her fated mate, Wren begins to wonder if she might need a second rescue. Before she can determine if the guy's a nutjob, her hot-headed brother finds her and locks her away for her own good. But Wren can't stop thinking about the sexy shifter and what their mutual attraction might mean. Can she figure out a way to escape her brother's enchantments or will she live the rest of her life wondering what might have been? 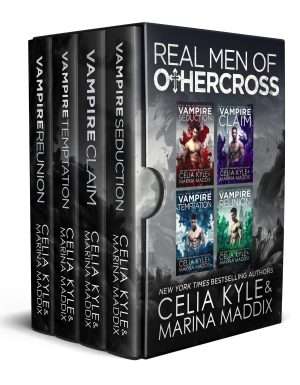 These vampires have MATES on their mind…

Get the first four books in the Real Men of Othercross series in one handy volume!

Vampire Seduction - He’s accused of a crime he didn’t commit and she’s determined to get him off… in more ways than one.

Vampire Claim - The man was “Oh God I wanna have your baby” good in bed and now… well… she's gonna have his baby and he's nowhere in sight.

Vampire Temptation - Is it her siren's song that tempts the sexy vampire? Her body? Or her heart?

Vampire Reunion - It was supposed to be a one-night stand, not eternity! 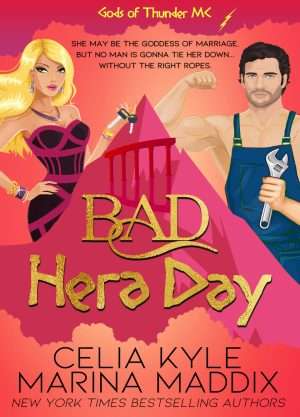 She may be the goddess of marriage, but no man is gonna tie her down...without the right ropes.

Danger. Excitement. Adventure. That's what Hera thought she was signing on for when she agreed to join the Gods of Thunder Motorcycle Club, led by her brother Zeus. Just the thing for a smoking hot, slightly lost divorcée who also happens to be the Greek goddess of marriage. Instead, her primary sources of entertainment seem to be picking bugs out of her teeth and finding yet another creative way to sabotage her peacock-painted Harley so she can ride in the comfort of the club's support SUV.

But this time she broke her bike a little too well. With the rest of the club on a tight schedule, they leave Hera behind to wait for the local mechanic to perform a miracle. A mechanic who fills out his coveralls better than any mortal she's ever met.

Hey, maybe getting stuck in the sticks won't be so bad after all.

With his days as the Norse God of Wolves long behind him, Fenrir has settled into a routine that suits his lone wolf ways. Ride into some small town, work a menial-yet-satisfying job for a while, then move on before anyone catches wise to the fact that he never ages.

Then she rides into town.

Glamorous Hera always turned heads back when they ran in the same heavenly circles, but seeing her poured into skin-tight leathers and sitting astride a beautiful bike really lights a fire in Fenrir?one he thought had died centuries ago. Not that it matters. She thinks he's some mortal bohunk grease monkey with more brawn than brains. Fine by him. He needs to keep a low profile anyway.

When Hera finds a wounded wolf pup on the outskirts of town, Fenrir must reveal his true identity to save the pup, opening a Pandora's box-worth of trouble with a nearby werewolf pack. If he were smart, he'd blow town, leaving the goddess who gets his motor running and the fate of a besieged wolf pack in his dust.

He never claimed to be smart.

If you like sassy heroines and heroes who make you weak at the knees, you'll love this Greek gods inspired paranormal romantic comedy!

Anyone judging Tiffany Ufora by her cover would undoubtedly think the goth witch was a necromancer--and that's fine by her. There isn't a shade of black that's dark enough for her taste. But much to her dismay, Tiffany's particular brand of magic has a habit of spitting out oodles of the most adorable fluffy, pastel-colored critters at the most inopportune times.

Mortified by her joyful magic, Tiffany does her best to control the uncontrollable. Which only makes things worse. And it doesn't help when her dad hears about her poor grades at Othercross University and cuts her off financially--forcing her to get a job, of all things.

Her salvation comes in the form of a burly, bearded, lumberjack of a vampire, who also just happens to be a new professor at OCU. When he offers to tutor her--for free, no less, which is about all Tiffany can afford--she jumps at the chance. It doesn't hurt that Nero is sweet, gentle, and not at all what one would expect from a vampire. He's also dangerously sexy.

And completely unavailable. Not that she's interested or anything.

Because Tiffany has her sights set on someone else anyway, though the question of whether the other guy wants her is still up in the air--along with the dozen or so lovebirds flitting around her head. You know, the ones that appear when Nero smiles at her. Argh!

Their chemistry can really raise the dead...

No one suspects that straight-laced witch Aurora Rhonelle comes from a family of powerful necromancers–a fact they never let her forget. So what if she prefers Anne Klein over Anne Rice and pastels over shades of black? That shouldn't make her any less respectable. Unfortunately, never having raised a dead human does damage her street cred.

With her new job as a Junior Investigator at Othercross Judiciary, Aurora is more desperate than ever to prove herself. Especially since her coworkers are all a pack of back-stabbing jackals and the higher-ups don't even know she exists. So it comes as a pleasant surprise–make that total shock–when her boss entrusts her with a case. One she screws up royally when the lead witness doesn't appear for court.

Just when Aurora thinks her career is over, hope arrives in the form of a captivating wolf shifter who is not only a judge on her case, but also believes she's his fated mate. Crazy talk! She has far too much ambition to even think about men at this stage in her life, but Nate's persistence–not to mention her intense attraction to the laid-back werewolf–is hard to resist. But resist she must, if she wants to salvage her case and her career.

But things aren't as they seem, and it takes the help of her wanna-be mate for Aurora to unravel the mystery. Now she just needs to unravel her feelings for Nate and reanimate a human to prove her worth.