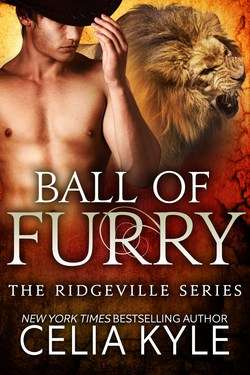 Perfectly plump Carly’s paranormal-wererabbit world goes kablooey on the night of the semiannual Gaian Moon. While all of the furry creatures in Ridgeville decide to knock boots and make babies, the only thing she wants to do is hide from all of the weenie-swinging men, including her would-be mate, Neal. There’s no denying he’s hotter-than-hot, and her bunny wants him more than her next dandelion, but there’s just one teeny-tiny problem. You see, Neal has wandering eyes, and a love for women that’s even bigger than his home state of Texas. But, to her surprise, the lion pounces when she least expects it…and claims her before she has the chance to say “No.”

As if her life isn’t crazy enough…it just happens to get that much crazier when someone decides they want her dead.

Question is–can she survive whomever or whatever the hell is hunting her, while trying her damnedest to get over the fact that Neal had a life before he met her?

For both their sakes, she sure as hell hopes so.

Carly stiffened in Andrew’s arms, her bunny senses going buck wild as she scanned the interior of Honey’s Bar & Grill. The members of her warren and the pride were gathered to casually celebrate her best friend’s mating to the lion Prime. After getting Maya, her BFF since first grade, through her initial shift, Carly was hanging with them all and having a fun time.

And now she’d found her mate.

“Carls?” Andrew’s voice was raised so that Carly could hear him over the music. “What’s up?”

“Andrew!” She leaned forward to whisper-yell into his ear. More yell than whisper, and a good dose of squee added in. “I found my mate! He’s here!”

She couldn’t help talking with such excitement. She’d found the male she’d spend the rest of her life with, the man who would father her kits.

Now, she just had to find him.

She pulled back to look at her friend and found his expression…odd. Andrew looked as if he’d been slapped, stomped, spit on, and then someone had kicked his puppy. Well, he didn’t have a puppy, but if he did, it’d been whaled on ‘til the thing was barely breathing.

“Just now?” He tightened his arms and his grip grew tighter as seconds passed, his hold nearing pain while he focused intently on her. “You’re sure?”

“Sorry. I thought…” He swallowed hard and released her, sorrow evident in his eyes. “Sorry. Go ahead. Find him.”

Carly furrowed her brow. She’d always known that Andrew felt more for her than the love of a friend, but still, his reaction seemed stronger than she’d anticipated. Maybe finding her male now was perfect timing. Hopefully, as she spent time with her new found mate and less with Andrew, his feelings would fade.

Another hint of the musky scent of raindrops and daffodils wafted across her path and she stepped out of her friend’s arms. She’d spend some time on Andrew’s feelings…later. She needed to find the source of that yumminess. Now.

She wove through the gathering, smiling gently at various members of the warren, and kept an eye on the lions that looked at her like she was dinner. She suppressed a shiver along with the hint of fear that had gathered in her chest. Fear would simply force the cats to chase her and add raw bunny to the menu.

So not a good thing.

Maya had been considered an honorary warren member–hence the bunny attendance–but Carly didn’t need to tempt the carnivores.

A tingle of the male’s smell crossed her path and she followed it farther. Around and through various groupings she traveled, closer to her goal with every step. The scent of her quarry grew as she neared the bar, and she eyed the gathering of bodies.

Several males lined the long piece of polished wood and she looked them all over. She recognized a couple of rabbits–her cousin Beth among some of the guys, teasing and flirting with them all–and tossed their presence aside. She’d known them since she was little, a kit hopping after her brother. No way could any of them be her male. Which left three others as the likely candidates.

Carly approached, stared at the back of each of them as she strolled past. Surreptitiously she sniffed, leaned close, and gathered their scents, trying not to look too stalker-esque.

The first male smelled as if he had bathed in alcohol with undertones of sadness and fiery woodlands coating him. “Yo! Can I get another, blondie?”

The bartender sent a beer sliding down the bar top. “Here ya go, Ricker. On the house.”

The man’s name teased the back of her mind, but she couldn’t place it. Not that it mattered. Her guy was all early morning rain. Her fave.

Two steps brought her to the next and she repeated the process: a sniff, deep breath, and sunshine wafted over her. Nope. Bunny wasn’t having it. She wanted the rainy daffodils, damn it.

Carly knew when to listen. Besides, daffodils were her rabbit crack and she was a lifetime addict.

The third male…she shivered, partly in disgust, partly in excitement.

Damn the process of elimination.

He had black hair and deeply tanned skin. Of course, she’d have been able to see more of him if it hadn’t been for the thin blonde draped over his back like a blanket.

He turned on his stool to face the woman and wrapped his arms around her waist, smiling as he hugged her close, a way too sexy dimple on display.

The woman before him stuck out her lower lip with a pout. “You love me, don’t you, Neal?”

He leaned close and kissed her, teeth nibbling on the blonde’s lower lip. “Of course, darlin’.” His hands traveled down to squeeze the lady’s ass and nausea gurgled in Carly’s stomach. The scent of the woman–human–hit her the barest moment before Neal’s scent poured over her skin. Male musk, spring rain, and daffodils.

Her mate, her male, sat before her, his hands on another as he proclaimed his love for her. Oh, god, she was going to be sick.

Carly whimpered and swallowed against the vomit traveling along her throat. She’d been so naÃ¯ve, so bowled over by the stories her parents had shared over the years. She’d always imagined her mate as a male who’d saved his love (if not his baby-making equipment) for her, and only her. She’d never gifted her heart to anyone, and here he was…

She took a step back and her movement drew his attention. Blue eyes focused on her while his nostrils flared and she watched the knowledge of their connection flow through his body. His muscles tensed and he released the woman’s waist, grabbing her wrists and forcing her to let him go.