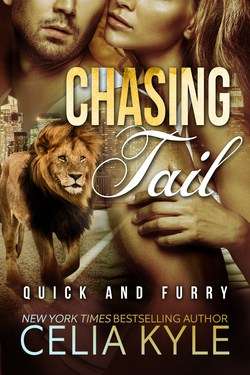 Werelioness Penelope Little has a growling lion pacing the library’s shelves. Not just any lion, either. He’s the most powerful feline in the country. And for some reason, he’s got his sights set on curvy, slightly nerdy, and totally frumpy Penny Not-So-Little.

When he finally calms enough to shift… Well, gorgeous doesn’t begin to describe him. He’s sexy, sinful, and has a smile that nearly brings her to her knees. Even better, he’s all hers. Or is he? When a witch is involved in his sudden appearance, there’s no telling.

A werelion prowled the library shelves, pacing amongst the rows. The werelion aspect wasn’t a huge surprise considering the town was filled with them. From the sheriff to the school principal, members of Penelope Little’s pride held many positions. Including Penny herself as the town librarian.

So, a furball roaming the stacks was a familiar occurrence. Especially on Wednesday after the kindergarten reading circle rampaged through the space.

The only problem was this particular lion was quite a bit bigger than the beasts that usually visited. Bigger as in, an actual full grown male. Big. Really, really big.

He released a ground-shaking roar and Penelope steadied the stack of books that trembled on the corner of her desk. Dammit.

She heard him breathing heavily as he paced the length of the room. Air huffed in and out of his lungs, and she imagined his moist pink nose hovering over the ground as he sniffed the area. He was obviously hunting something—chasing his prey—she just wasn’t sure what. Hell, she wasn’t even sure why he bothered. The library was frequented by so many people day in and day out, lions and humans both, she didn’t think he could actually find what he sought. But, whatever. Let him waste his time. She just wished he’d find it and leave already. There was a group of second graders due any moment and she hadn’t had a chance to straighten the children’s area.

Another roar, and this time the other pile wavered and actually did fall. Dammit. For real this time.

Enough was enough. She wasn’t sure when Mr. Growly snuck in, but he needed to get gone. Thankfully, Penny knew just the lion to handle the job.

Penny snatched up the phone and quickly dialed her alpha. There was only one ring before her call was answered, and the voice that reached her sounded panicked and harried.

Since Penelope was outside the clan’s den, even if no customers were in the building, she used the woman’s true name rather than her title. “Hi, Dana, this is Penny down at the library. I, uh, was wondering if Justin was missing a friend from out of town.”

“A friend?” The woman cleared her throat. “What kind of friend?”

“Our kind of friend.” Stress on the our.

“And…” And what the hell should I do with him? Of course, she couldn’t actually say that without sounding all disrespectful and whatnot.

“And…” She could practically hear the woman thinking. “I guess just make sure he’s comfortable. At least until Justin gets there.”

“Comfortable?” The woman had to be crazy. How the hell could a lion be comfortable in a freaking library? Hell, half the time Penelope wasn’t comfortable. It was just that… She really enjoyed books. Well, reading books. Filing them after ankle biters got their hands on them was a different story. “You don’t want to—I don’t know—come get him?”

“It’s not like I can actually force him to take direction, can I?” Dana snapped.

Penelope was tempted to say yes, you really could since you’re the Alpha Mate, but refrained. She liked her hide just where it was, attached. “Okay,” she swallowed past the new nervousness that attacked her, “what should I do with him then?”

The “him” in question, rounded yet another row of shelves and stopped. He swung his golden-eyed gaze to her, and it was the first time she’d actually met his stare. From the moment he’d entered the building, she’d only caught glimpses of his luxurious coat. Only seen snatches of his fluffy mane and flicking tail. Now she was trembling beneath the full weight of his gaze.

Penelope’s inner lion purred and padded forward. The cat wanted to rub and slide against the larger male. That single look made her crave him. She licked her lips, mouth suddenly dry, and she couldn’t help but wonder what he’d look like on two feet rather than four. Oh, she knew he’d be tall and muscular, all male shifters were. While the females could vary in size and shape, the males—the protectors in their species—were always strong and dominant. Some more than others. This lion looked like he’d be massive in human form. Large and fierce and oh so delicious…

No, not yum. Bad, very bad. This male wandered around like he owned the place and disrupted her entire day. Inconsiderate, that’s what he was. Not yummy in any way. Except maybe in the very bad, very good way.

She was so lost. She didn’t even know what he looked like, but his aggression and dominance reached out and beckoned her. Penny’s cat wanted him like there was no tomorrow, and she found that her human body couldn’t wait to see him once he shifted. Everything about him called to her, and she would happily pick up the phone and answer.