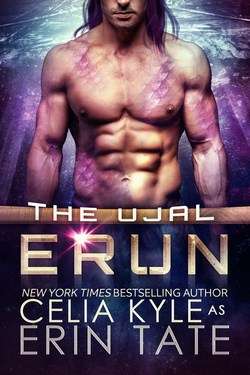 He’s an Ujal who knows he’ll never have a mate. She’s a human who doesn’t want to take another chance on love. One small child doesn’t give them a choice.

With her toddler in tow, Vanessa Walker travels to Tampa, Florida to begin her new job at Ujal Station Tau. Then problems arise—her daughter is ill, and a sexy, demanding, overwhelming, purple-scaled Ujal is determined to do whatever he can to save Tabitha. When they realize Tabby isn’t ill, she’s Ujal, plenty of people don’t want Vanessa raising her newly tail-sporting alien daughter. Ujal royalty may support her, but only one person—one Ujal male—makes her feel safe: Erun fa Arex.

Erun fa Arex earned his position through blood, sweat, and scales with a trident as his constant companion. On Earth, he is the captain of the principessa’s elite guard, a worthy Ujal warrior matched by few. On Ujal, he grew up as a child slave forced to fight for sport and others’ pleasure. Fighting left physical and mental scars while the master’s growth-hormone injections left him unable to father younglings.

Erun never considered mating and having a family of his own until he meets Vanessa and Tabitha. Now he realizes everything he rejected—a mate and family—is exactly what he desires. And he will fight to keep them… to the death

Vanessa hadn’t recovered from the loss of her husband only to have her daughter die. She wanted the privilege of murdering the little pain in the butt for herself.

All it’d taken was one second, one quick glance at a passing male, a quickly whispered question because she was lost, and Tabby was off like a shot. The toddler ran as fast as her little legs could carry her and… right into the path of oncoming traffic. Her baby was going to be run down by a hovocar. Or, God save her, a hovobus.

Adrenaline flooded her body, her gaze focusing intently on her rapidly retreating child. Panic overcame her, blanketing her in a wave of fear that nearly sent her to her knees. Her heart pulsed a rapid rhythm that stole the air from her lungs. She ran as hard as she could, legs pumping. One shoe flew from her foot and the other soon followed but she didn’t care. Not when her last reason for living was so close to death.

“Tabby!” Nessa ignored the Ujal male who’d paused to answer her question and raced toward the street. She bolted, uncaring who she pushed out of the way as she made her mad dash toward her giggling child. “Tabitha!”

Tabby glanced at her, those legs still pumping, and she giggled. “Catch!”

“No.” Now wasn’t the time to play catch. Any time other than now would be great. She pushed hard, fought for air and demanded her body give up whatever strength it had left. Just let her get there. Just let her— A sob escaped her throat, the feet separating her from her child seeming like a great chasm.

A horn honked, the sound booming a symphony in her ears. A warning. A death toll that told her she was moments from losing what little joy she had in her life. “Tabby…”