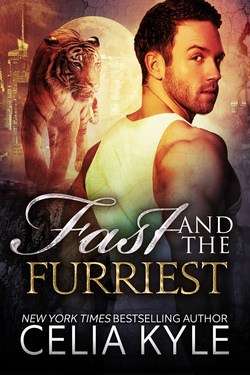 Ladies, like a tiger's stripes? Tug his tail and keep him forever!

The wolves came first. Followed by the bears. Finally, lions decided to play in the spotlight, but the tigers have held off. Let everyone else get stared at. Ares was happy on his mountain with his pride while humans thought they knew all about the different shifter species.

Their secret was safe…until her. One reporter took tigers from the shadows and thrust them into the limelight by releasing a picture of a tiger shifting. Specifically — him.  (What could he say? A little moonlight, a little fur…)

Now he has a town of stripe-hunting women looking for a tiger’s tail to pull and… a full moon on the horizon.

Can he keep his tigers from being mated against their will? Better yet, can he forgive the one woman responsible for outing his species?  Ares isn't sure, but he's willing to give it a shot.

Ares never thought he’d say the words in his lifetime, but he opened his mouth and out they came. “You can’t eat a human just because he looked at you funny.”

His sister Claire glared at him. “He was gonna pull my tail.”

God save him from paranoid tigers. He closed his eyes and pinched the bridge of his nose as he asked the obvious question. “Were you wearing your tail?”

“Then please tell me, by all that is striped and orange, how the hell did you think he could tug your tail if you weren’t wearing it?” Claire winced, and he realized he may have been shouting by the time he finished his question.

But who could blame him? His mother should have killed Claire at birth. Not because anything was wrong with his sister, but mainly because twenty-two years later, she was a real pain in Ares’s ass.

He took a deep breath and tried to find some sort of calm. It hadn’t worked so far, but a man could hope. “Claire, you know how it works, we all do.”

Mating was a three-step process for tigers. Sex without a condom to give their partner a few shifter characteristics and see how their significant other handled those changes. Then a bite made the changes permanent.

Neither was the true tie that would complete a mate bond, though. The most important, the action that once taken could never be reversed, was the tail-tugging. It went soul deep and formed a bond that only death could break. With or without bites, that one act couldn’t be revoked. For a tiger to have their tail pulled, to have that binding forced on them…