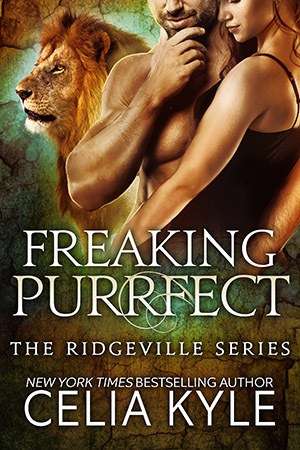 Maya has always wanted a hedgehog shifter in the Ridgeville pride. She almost stole one once, but she sorta went into labor before Operation Quill Catcher took off. Now, she wonders if having a werehedgie is all it’s cracked up to be. After “borrowing” (kidnapping and/or saving… depending on who’s asked) a werehedgehog her daughter has to run for her life, her mate has to take a life, and one of her sons thinks hedgehog is on the menu.

And as for the hedgehog… she’s freaking purrfect.

This short story is set in the RIDGEVILLE SERIES and does not stand alone. This is a little bite of family life for those who fell in love with the Ridgeville gang and aren’t ready to let them go.

“Ladies, if someone tells you that you’ll forget the pain of childbirth, they’re straight up liars.  The reminder of that pain is a whining, crying, poop factory that sticks around until its eighteen, and its sole purpose in life is to clam jam its mother when she wants to get her freak on.”  -- Maya O’Connell, Prima of the Ridgeville pride and woman who most recently had her taco block-o-ed by the aforementioned spawns of Satan.

Maya hadn’t killed her children yet, and she didn’t want to ruin a nice fourteen-year streak over a…

Screw it. Yes, yes she did want to ruin the streak.

She breathed deeply and sought calm, trying very hard not to scream the house down.  Her inner lioness told her to rip their den apart with her bare claws until they found the little rodents.

Not that her kids were rodents, but it was easier to kill them if she thought of them as mice and not, well, her kids.

No, no, no… She couldn’t get rid of them yet. She’d have to wait until after dinner. If she hunted them right that second, she’d have to explain everything to Alex, and then he’d try to be the one to kill them. He was not stealing her bloody, claw-tipped thunder this time. Which meant she had to keep her overwhelming ragefire—anyone but her kids would get hatefire—under wraps.

She drew in another slow breath, fighting for a calm that seemed totally out of reach, and got a lungful of… Alex.

Alex, the father of her children.

Alex, worshipper of the vagina.  At the moment, she really wished he was in a worshipping mood because that was the only thing that would fix the hot mess surrounding her. And by hot mess, she meant the completely missing spread of bow-chicka-bow-bow-inducing delicacies that’d previously decorated the dining room table.  All that was left were a few scraps and very familiar claw marks marring the solid wood surface.

If she had to tell her kids no claws in the house one more time… Well, she already planned on murdering them, so she’d just make sure it was painful.