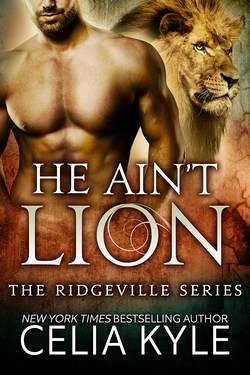 Life sucks… And then you get turned into a werelion…

Curvaceous, blonde bombshell Maya Josephs is looking for a little action to take her mind off of her recent break-up. Crazy werecats or not, an evening at Genesis is exactly what she needs. And when she meets the hotter than hot, super-sexy owner, Alex O’Connell, the alpha lion shifter is just the man to fit the bill for a one-night stand.

Dumped like a rotting piece of meat by her ex, Maya is on the prowl, fixin' to do whatever it takes to get herself a piece of the gorgeous furball. Besides, what’s the harm in a girl having a little bit of fun?

Alex O’Connell watched the ripple of awareness ease through Genesis, his club, as each male seemingly became mindful of the newcomer, the unknown human female, in their midst. The singular woman who smelled nothing of pride or pack.

He ran a hand through his hair and willed his inner cat to calm. Unfortunately, the beast wasn’t in the mood to be denied. It’d already scented the lush woman, and was more than ready to pounce–strip her naked and slide his hard length inside her body.

How the fuck had she gained entrance?

The semiannual Gaian Moon was making an appearance tonight, so Alex had gathered his pride and willing humans, known as familiars, to converge within the confines of the club. Sex could be had, raucous noises could be made, and most of the furniture had already been cat-proofed.

Who was she, this unfamiliar female swaying her curvaceous hips amongst his felines, completely oblivious to the trouble she was about to cause?

The Gaian Moon ensured cubs would be born, and that their pride would continue to flourish. Without the celestial rising their numbers would almost certainly dwindle, and they’d likely wither and die, as true matings were extremely rare among his kind.

The humans in attendance knew what they were in for, the moment they’d become pride familiars. The pride would care for them and any offspring, for the remainder of their lives, so long as they made themselves available at the Gaian Moon gatherings, and helped the pride when called upon. Giving birth to cubs only ensured that pride protection and support would be everlasting.

There were several true matings in their pride, but those couples remained at home to make little cubs of their own, while the others romped their way through Genesis.

The female in the tight, cleavage-revealing red dress, though, was not a familiar. Alex knew this, because he was the prime, damn it.

His felines were staring at her as if she was a slaughtered deer, and they hadn’t eaten for weeks. Even so, she continued to mingle, now easily fifty feet from where he stood, and yet, he could still scent her heat, single her out from amongst the gatherers. He needed to do something. Fast.

“You need to do something, Alex. And fast.” Grayson’s words cut through his thoughts, mirroring his own. “She’s not one of ours.”

“I know.” Alex barely recognized his own voice, and he paused for a moment to take stock of his body’s responses to the new arrival. His cat, normally easy to control after years of practice, was fighting Alex’s restraint, snarling and snapping at its internal cage, prowling just beneath the thin veneer of his skin. The fucker wanted out. Now.

His arms tingled, skin prickled, and he knew–without looking–that golden fur had sprouted from his forearms. The throbbing from his hands would soon reveal fuzzy fingers, and lethal, razor-sharp claws. Fuckity fuck.

“How’d she get in?” His lengthened canines made speech difficult, but not impossible.

He watched the expressions that flitted across his second’s face, where feelings of regret and remorse appeared to be dueling for supremacy. “I put Gina on the door, and she said she could’ve  sworn  the woman was on the list. And that her scent held your mark.”

Alex rolled his eyes, immediately refocusing his gaze on the tempting interloper. Her blonde hair practically glowed under the dim lights of the club, her pale skin a beacon his lion was more than happy to follow to the ends of the earth. “She’s still pissed at me for not mounting her during the last moon, and I’m sure she’s just itching to start some trouble.”

Grayson nodded. “I think you may be right.”

Lion wanted this stranger. No doubt about its feelings, the beast practically begged and snarled its needs to Alex. Part of him wanted to charge through the gathering, steal her away to his den. Unfortunately he couldn’t do that, not without revealing his true nature to the woman. Sure, shifters were known to the human populace, but they weren’t exactly “out and proud” about their existence. Nonchalance and some closely kept secrets had kept the shifters protected thus far, and the various clan leaders around the world wanted to keep it that way.

Alex had too much on his plate already, and he’d rather not add “calming a panicking human” to the list.

“Bring her up, Grayson. I’ll speak with her, and then send her on her way. Perhaps give her an incentive to return on another night. We can’t have her in the building once the doors are locked and the festivities have begun.”

As if the reminder of his title within the pride wasn’t enough to pressure him, the last thing Alex needed was to be further stressed by his second’s announcement of the remaining time, damn it. His cat was more than aware of how long it needed to wait until it could mate with the fertile, willing females, and the opportunity to produce cubs of its own, true mate or not. His lion had yet to be successful, but it was more than willing to keep trying… “Then make it fast.”

Her friend Gina hadn’t lied. The guys in Genesis were all staring at her as if she were a big hunk of choice beef, and they hadn’t eaten for weeks. Then again, the whole semi-drooling thing could be because they were werecats. But wait, weren’t dogs the droolers?

Maya mentally shrugged. Gina, even if she did seem a little cat crazy, was fun to hang out with, and now, she was Maya’s very best, hook-me-up-with-hotness, friend.