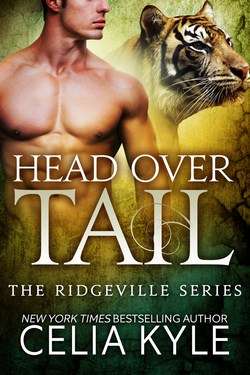 Being kidnapped sucks…but then you find your mate…

Maddy Lane did not enjoy the whole “being kidnapped” thing.  Then her knight in tight leather showed up to rescue her lioness-y ass and he turned out to be her O-M-G mate.  Rawr.  Sure, she’s a Sensitive. And, yeah, Sensitives are usually pushovers. But Maddy has been getting “badass” lessons and she’s got no problem telling her hotter-than-hell mate where he can shove his orders and domineering attitude.  Of course, it’d be a lot easier to be growly with him if he wasn’t so damn sexy.

Ricker Croft, council tracker and ferocious tiger, can’t figure out what to do with his deliciously curvy mate.  She’s a study in contradictions and he never did well in school.  As a Sensitive, Maddy is supposed to be sweet, pliant, most importantly, his. She sure as hell wasn’t supposed to be a vicious she-cat who sliced and diced a man attempting rape.  And she shouldn’t have disregarded a direct order from a more dominant shifter.  Even more, the words “get the steel rod out of your ass” should have never passed her tempting lips.

Ricker knows that mating doesn’t equate to love, but he’s going to do his damndest to convince the woman who holds his heart that she can’t live without him.  Even if it means turning his life upside down and embarrassing himself in the process.

“Backbones are like assholes. Everyone’s got one. You just have to find yours. The backbone, not the asshole. I’m assuming you know where you asshole is. If not, we have bigger problems.” – Maya Josephs, Prima of the Ridgeville Pride, who swears ta god that she will slap her last name on her unborn twins’ birth certificates if her mate doesn’t marry her soon.

Maddy Lane’s kidnappers had been all about kung-fu fighting and fast as lightning.

She was not a kung-fu hi-ya! kind of gal and tended to lean toward run-and-hide.

Now, a ton of minutes post-kidnapping, she’d decided that being abducted was not an enjoyable experience and she really needed to learn how to wield a judo chop.

She kinda figured the kidnapping adventure needed to come to an end. Any time. She was totally ready. In all the romance novels she’d read, the heroine would be spirited away by evil-doers and then rescued before anything bad could happen to the poor, defenseless waif.

She hadn’t been rescued…not that she’d been missing all that long.

But still. Bad stuff had happened.

She tongued her lower lip, wincing when the muscle encountered the oozing wound that would make it hard to smile for a while. Her head throbbed to the hella fast beat of her heart. One of the assholes in the SUV was the cause of both discomforts and she’d love the chance to repay him.

Eventually. When she gathered enough nerve to fight them. Which would probably be never, but a girl could hope.

Maddy twisted her arms, rubbed her wrists against her bindings and searched for any give in the material. Snippets of pain from the movements registered, but she couldn’t worry about those feelings. Not when her life was at stake. Because, really, she wanted to do the whole “living” thing a little longer.

The SUV took a sharp left and she was thrown against one of the men. A piercing ache erupted in her chest and a small whimper escaped without conscious thought.

Okay, she could add bruised or broken ribs to her list of injuries. Lovely.

The man she leaned against didn’t respond to the sudden additional weight. But, as low as the sound had been, it caught the attention of one of the other males.

A beefy hand wrapped around her upper arm, yanking her upright once again. “Hey, pretty. Shut it. We don’t need no shit from the boss’ kitten, got it?”

She squeezed her eyes shut as the prickle of tears gathered behind her lids. She willed the moisture to recede. There was no way she’d let the men see her cry.

The male released her and she stifled another sound, a deep groan that had built in her chest as he’d held her tight. The palm had been covering a bruise, nothing more, but that additional ache just piled on with the others in her body.

Maddy felt like a bruise from head to toe and back again. Sure, she figured they’d tried to be easy with the whole “sneak in and grab her” thing, but she’d been asleep when they came for her. And when she slept, she forgot to be afraid.

No, it wasn’t until that first brush of a foreign breath on her skin that she knew her space had been breached and she’d awoken a tad…upset.

That wasn’t even right. Upset was a word her parents used. Angry maybe? Pissed worked even better. Okay, fucking enraged.

Well, they’d woken her and then they’d had to deal with her. More importantly, they had to deal with Maddy’s lioness. The cat had been less than pleased with all the males crowding her space.

Hell, she didn’t remember most of what happened between waking in her bedroom with a man looking down at her and sitting in the SUV. Obviously, it hadn’t been pretty.

Maddy took as deep a breath as she dared, pain in her chest flourishing with the move. She needed to stay calm and figure out where her life had gone to hell.

And the quickest way to do that was tap into the wonderful powers she hated and put them to use. Her abilities were the source of her life’s hardships, but they had their uses.

True, being a Sensitive meant she could do more than a “normal” shifter. She could sense turmoil in the pride, soothe others in need and glean knowledge that shifters may want to keep hidden.

Guess how many lions, hell shifters, avoided her?

When shifters weren’t taunting and being mean to her, they were keeping their distance, afraid she’d somehow lay some voodoo smack-down on them.

Well, except Maya. The pride Prima had a knack for cutting through B.S. and had a habit of telling the other cats to get the fuck over themselves.

Maddy wanted to be her when she grew up.

Sensitives were needed, essential, but they were also the physically weakest of the cats which left her at the mercy of the others. True, the Prima had put an end to all that, but the fear lingered.

Damn her fear. She really needed to find her backbone like Maya had told her.

Fuck it. She’d find it later. For now, she needed the metaphysical “lay of the land”.

One last breath and she let her consciousness float. Honestly, that was the only way to explain it… She just drifted in her head, the two halves of her mind twining in the cool darkness, picking and poking at one another until they twirled together and became one.