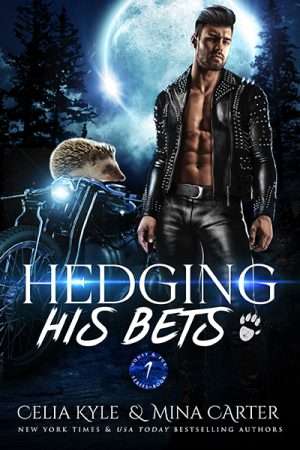 Honey loves running her bar and grill, catering to humans and shifters alike.  But there are two things that dim her love of the place: cocky assholes who think they own the world, and cocky assholes who think they can flex their muscles and wreck her bar when throwing a temper tantrum.  Unfortunately, the drop-dead gorgeous, hotter than hot, shifter man she secretly loves is both.

Blake wants the curvaceous, gorgeous Honey in his bed. Now.  He’s lusted (but not loved, let’s get that straight) after the luscious woman for months.  True, he looks like a bad-boy biker mixed with a player and, yeah, he’s broken a few things in her bar… But only because the guys were hitting on his girl.  With no hope of winning her over in sight, he does what any red-blooded werehedgehog would do in his position.  He lies.

Publisher's Note: If you enjoyed "Hedging His Bets", be sure to check out these two smoking hot related series: "Stratton Wolves" by Mina Carter and "Ridgeville" by Celia Kyle.

Honey was surrounded by drunken idiots. A fact that did not amuse bad-boy Blake Carlisle one bit. He leaned in the doorway for a second, and his heavily muscled frame all but filled the opening as he watched the men surrounding her. The bar was bustling, the place filled wall to wall.

His dark gaze flicked from one face to the next. Later there would be a reckoning.

Honey was his. She had been from the moment she’d arrived in town six months ago and taken over the bar and grill. The sooner people around these parts worked that out, the fewer heads he’d have to break.

Blake walked into the room. Encased head to toe in black leathers, he was the stereotypical biker, right down to the long hair that curled into his neck and the tattoos on his biceps.

As he passed, conversation fell silent. A sense of wariness filled the room, the sweaty tang teasing his nose as they watched him. Watched and waited to see what he’d do next. A bad boy from the wrong side of town, it was no secret Blake had seen the inside of the sheriff’s holding cell more times than most people had hot dinners. He’d lost count of the number of fights he’d started and then finished.

He reached the bar and leaned against it to watch the fracas surrounding his Honey. Amazonian tall with a fall of honey-blonde hair, she was well named. But it wasn’t the hair that held Blake’s attention. Nor was it the stacked rack or the luscious curve of her ass, all attributes he appreciated. Hell, just thinking about those curves kept him hot and hard at nights. But they weren’t what drew him to her.

She had the most beautiful turquoise eyes. Clear and piercing, it was as if she could see through the bad boy mask he presented to the rest of the world and saw him for what he truly was. Saw the man behind the secrets. Which scared the shit out of him and drew him in all at the same time.

“Hey, what’s a guy gotta do around here to get a drink…” One of the louts around Honey pushed his way to the bar, knocking one of his companions out of the way to get in front of her. Blake’s hand curled into a fist as the guy leered at her cleavage. He was going to break bones later. Lots of them. “…or perhaps a little something ‘extra’?”

Red mist descended over Blake’s eyes. Without thinking about the consequences, he surged to his feet. The locals, well used to his behavior by now, cleared the tables nearest to the bar. He ignored their movements. They thought they knew him, but they didn’t. If they knew the truth, they’d be running for the hills. That, or die laughing.

Blake was a shifter. A were if someone wanted to get technical, which meant he was stronger, faster, and meaner than any human alive. He could bench press cars without breaking a sweat or run a marathon before breakfast. If his sexual aura could be bottled and sold, it would make someone a fortune. Men wanted to be him, women wanted to be with him. All in all, he was living the dream. Apart from one little detail. Blake was a shape shifter, yes, but he preferred to remain in his human form because the fates were bitches with a twisted sense of humor.

There were werewolves and werecats, even bad-ass werebears. Blake was none of those. No, he’d lucked out in the small, spiny, and cute arena. Blake was a werehedgehog.

“Gentlemen, I think you’ve had enough,” His voice was low and held more than a hint of threat. The kind of warning that said he didn’t expect any argument, but if one came his way he’d happily take up the challenge. With his fists.

“I can handle this, Blake.” Honey gave him a glare for his troubles. The sort of glare with its own subtle innuendo. Blake abruptly lost the ability to read her and just stared at the guy in front of the bar.

The stranger turned around and rested on his elbows against the solid surface. “Yeah Blake, let the little lady handle this. And I’ll handle her…” Catcalls went up from the group around the man as high fives were exchanged.

Blake shrugged and hooked a chair from the nearest table with his foot. He picked it up, looked it over, and pretended to admire the workmanship. “Well, you know women… Sometimes they don’t know what they want. And they never realize when they’re in over their heads. They need a strong man to look out for them.”

Honey squeaked in outrage, her face turning a bright shade of red that he knew meant she was angry with him. Blake ignored her. His hands smoothed over the back of the simple chair as he turned it over. Blondie’s eyes flicked to it and back to him.

“Really? Personally man, I think you and your chair there should get a room and some quality time together before me and the boys here get bored and decide you need to be taught a lesson.”

Blake looked up through the hair that had fallen over his face and smiled. Not a nice, “how ya doing?” smile, but one that said bad things were about to happen.

“Blake… Blake you put that chair down now,” Honey warned, her sweet voice rolling through him, but not doing a damn bit of good at soothing the beast inside.

“Is that so? Well then…” He ripped the thing apart in one quick jerk.