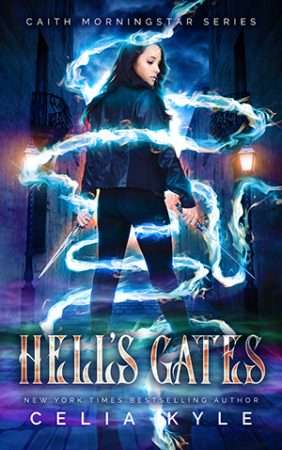 Orlando—land of that famous mouse—is on day three hundred sixty-two of my demon ban and life is… boring. Until a demon finds a way around my magical blockade with a new demonic drug. Now humans are getting high and disappearing while tweeners—magical beings that live in the land between On High and Hell—are grinding on my last, violent nerve. When my son is infected with the evil taint, I realize this demon has forgotten my rules: order, secrecy, discretion, and don’t screw with me or my stuff.

Bryony is mine. Orlando is mine. This dem’s head? It’s gonna be mine, too.

But, as much as I want to deal with this alone, I can’t. I have to face Samkiel—my fallen angel mate I lost to evil. On High has given him back some of his angelic mojo and I need his purifying hand to cleanse human souls, his help tracking down the local dealer, and him at my side when we locate the dem determined to get his claws into the mouse’s house.

I lost Sam once and survived. The question now is whether I can survive losing both of the men I love most?  Or rather, will the world survive?

I stroked my new bat where it rested on its shelf beneath the bar. The pristine, polished wood was smooth beneath my palm and I traced the Louisville Slugger logo branded into the surface.  Just beneath that, I’d had my BFF Jezebeth add a little something extra for me with her magical mojo. Property of Hell’s Chapel along with my bar’s logo. I was gonna add my name, Caith Morningstar, but since the humans knew me as Caith Murray this time around, I had to stick with something generic. Blech.

Man, I remembered the good old days when a gal could keep the same name for a few centuries without a problem. Stupid digital-computer-age shit.

But bitching didn’t change the fact that I was sitting in Hell’s Chapel with a new bat and no one worthwhile to use it on.  Even worse? I’d had this one for nearly a week. A week. Unheard of. Maybe I was going soft.

I sighed and scanned the bar, hoping for some action but knowing there wasn’t going to be much.  A couple of punk-ass trolls were getting into an argument over a round of drinks to my left and it looked like they were being polite about it. For trolls anyway.

Same shit, different night with all of my regular tweens—peeps that lived between On High and Hell—filling the stools, along with a handful of strays that had wandered in off the streets.

It was what I’d wanted though, right?  I’d banished the dems—demons—from Orlando a year ago because of my asstastic family. Though, why I’d ever thought they’d be better than they were still escaped me. My uncle was the devil and my mother was his sister, so… yeah.