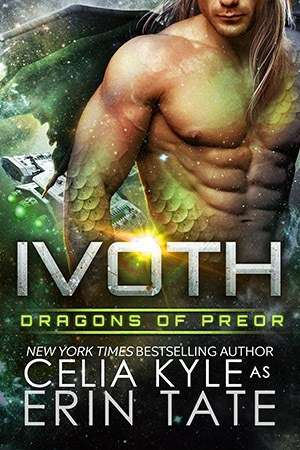 He has to choose—love or honor—because he can’t have both.

Elle may be a Davenport, but she’s finding she enjoys life as a mostly-gray sheep of the Davenport family. She kicked off the Daven Bio uniform and now works for their corporate enemy—Cole Pharma, now headquartered in Preor Tower. She’s got massive, muscular, winged aliens surrounding her from sun up to sun down. But there’s only one Preor warrior who throws her world into a tailspin—Ivoth sen Pezet’li. Strong. Sexy. Sinfully seductive. Hers? No. They don’t share the Knowing, but that doesn’t stop her from wanting him. Bad.

Ivoth made a vow to his sire—the sen Pezet line would not end with him. And yet, when he speaks with Elle, scents her skin, and feels her curves against his hard body, he does not know if he can let her go. He craves her more than any other—perhaps even more than he desires to fulfill his vow—and he knows he must make a choice. Keep Elle and never have dragonlets or leave her and lose his heart forever.

Ivoth has to make a choice, but first, he has to keep Elle alive. Someone wants her dead and Ivoth is determined to kill them first. He only prays to Syh he is successful.

Elle Davenport let that word linger in her mind, repeating the syllables with every step nearer to the empty window frame.

By the stars, shattered.

Her heart rate doubled, blood and adrenaline rushed through her veins at an ever-increasing pace, and air heaved in and out of her lungs. She wasn’t a worrier by nature—worry, not panic, because Davenports didn’t panic—but she was a little concerned by what she saw.

Yes, concern was an excellent word. Not worry and definitely not panic.

Charred remnants of tech framed the portal, sparks flickering and raining down on the concrete sidewalk. A sea of dark sand covered the pale gray walkway, disabled nanites forming a soft bed of deactivated robotics.

She continued on her path toward the destruction, her heels clicking on the hard ground. She wanted to break into a run, race to the building, push past the growing crowd, and dash through the entry.

But Davenports did none of those things. They were stately. They walked. They did not touch others and simply stared until a lesser moved. Hair always remained in place, and they never ever sweat or allowed anyone to see them in any way other than perfect.