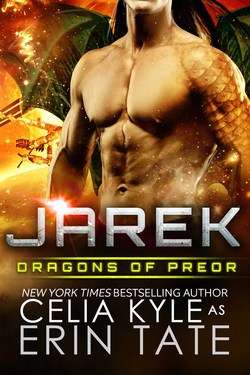 What’s hotter than an alien with scales? An alien with wings and scales, not to mention a hot body.

At 457 Preor years old, Jarek sen Claron is a dragon ready for his final flight into the skies.  This voyage to Earth as the War Master of the third fleet will be his final assignment. Once he has helped his fellow Preors secure human mates, he will return to Preor before the madness of loneliness overtakes his mind.

That all changes when he meets Melissa. Human Melissa with her sparkling eyes, bright smile, and body that would make any hot-blooded male drool.  Unfortunately, she never registered as a Preor mate hopeful. No matter, the Knowing stretches between them and there is no way she can resist him. Until she does.

Jarek wishes to give her the choice to mate him, while everything inside him screams to take Melissa beneath his wing, now. No choosing necessary.

But should he draw her to his side when his enemies are circling? Many males do not believe the son of a Preor mass murderer deserves to have a mate.  Can he survive the coming battles? Or will he die without tasting sweet Melissa’s lips?

They called it Knowing. When young, Jarek had always scoffed at such a thing. A Knowing. The idea was absurd. The masters and teachers heard his words and clucked their tongues, shaking heads and ruffling wings—clear signs they pitied him for his ignorance.

Then he’d lived year to year, watching his friends and peers experience their own Knowing.

Such as when Evuklar stopped in mid-flight, half way between Atue and Derilia above the Skoria forests. He’d pulled his wings tightly to his body, released a bellowing fire-tainted roar, and performed an aerial maneuver their masters never taught, diving into the trees. Later, after Evuklar saved his new mate from a group of Skors chasing her, he explained the dragon in his heart had stolen all control.

That was part of the Knowing—the recognition of their mates and subsequent tie of their minds. The rest… the rest was the gift of unerring knowledge of all that came before their lives. The collective history of their race, blood history, was opened to them.

It was large, vast, and heavy, Evuklar said. Something that could only be endured with a mate at his side to help shoulder the burden.

Jarek stopped doubting then. No, there were no doubts, but envy was now his constant companion.

Even four hundred twenty-two years later, the burn of envy filled his veins. He pushed the emotion down, unwilling to let it overpower him. If he allowed his emotions to rule his body… Well, they might as well send him on his final flight now and not wait until the madness of loneliness stole his mind.