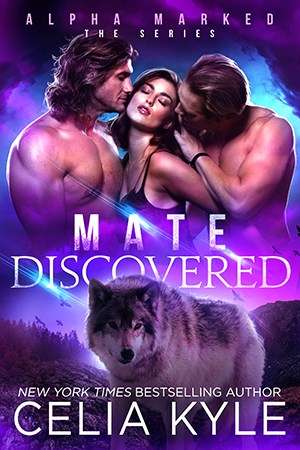 Thirty and single? Well, getcha ass to the Gathering!

Whitney Wickham is at the darned annual werewolf Gathering all right.  Only there’s one problem: she doesn’t belong there.  Her sisters carry the Mark indicating they’ll mate an Alpha Pair of wolves, while Whitney does not have that lovely, swirling scar.  She’s been hauled half way around the world to be stared at, and not-so-covertly sniffed, for no reason.  Unfortunately the gorgeous, drool worthy, magic-mojo-wielding Wardens don’t know why she’s been summoned to the Gathering any more than she does.  Which sucks. But at least they’re hot.

Emmett Greene and Levy Walters are Wardens—keepers of the law and embodiment of the magic of the werewolves.  They can never mate, never marry, and never form a lasting romantic relationship. It’s a hard and fast law that keeps their powers pure of outside influence.

Rules are going to be broken.

One look at Whitney, one hint of her scent, and they realize their immovable laws might have to jiggle. She’s got luscious curves, a wicked smile, and a mouth that would make a thousand men weep.  No matter the rules, their inner wolves will claim her. The only things standing in their way are the Elder Wardens who will do anything… anything… to keep Emmett and Levy from discovering the truth: the laws are wrong. And being with Whitney Wickham is so very, very right.

Whitney reminded herself that she was not a violent person. She had to recall she was sweetness and light and everything bright. Hell, she helped old ladies cross the road, went to church on Sundays, and donated to charity every Christmas and Easter. She was a good person, damn it.

She definitely wasn’t the type of woman who dreamt of stabbing the Gathering organizer in the eye with a pen. Pens he, of course, ordered for the attendees to use as desired. Then again, maybe she did dream of that since she couldn’t wait to see one protruding from the werewolf’s eye socket. That’s what she desired. She snatched one from the table and gripped the thin piece of plastic. Nothing like being prepared.

The Ruling Wardens, the werewolves who also wielded the magic of the wolves and upheld the laws for all of North America, were avoiding her and she was about done. She’d been at the Gathering since Friday afternoon and it was now late Sunday morning. The men weren’t anywhere in sight. She wasn’t normally this bitchy, but enough was enough. A gal could only enjoy the spa at the werewolf run hotel so much before she was ready to pull her perfectly styled hair out.

“So, tell me again when I’ll get to see the Wardens?” Whitney managed to shove the words past her gritted teeth. It was the wolves’ fault. Ever since she’d arrived at the Gathering, her timid, sweet exterior had transformed into raging “kill people” mode.

The man trembled and she didn’t kid herself it was due to her. Nope, the Ruling Wardens were scary guys. Well, as far as the wolves were concerned. The Ruling Alphas held their position through dominance and brute force, things other wolves understood. Even their beasts recognized the situation with ease. It was instinctual, animalistic, feral. That said, the Ruling Wardens kept their position through magic alone. The two of them had so much power there wasn’t another in the world who’d would ever think of challenging them. For the Ruling Wardens, death could come with a thought.

“W-W-Well, the Ruling Wardens are meeting with the wolves with legitimate concerns and they said—”

“Legitimate…” She took a deep, calming breath and stared at the far wall.

The hallway echoed with people—wolves and humans alike—heading to meetings. Hotel staff darted between bodies on two feet and stumbled past the few who wandered around on four. Apparently, being in wolf form made the whole sniffy speed dating thing easier. Soon they’d be going into the second round of Tests of Proximity of the day. There, Alpha Pairs got to sit around and see if any of the Marked females belong to them. Sniff! Mark tingles! Mate!

Voices bounced off the pale marble tile, and the sun shining through the massive floor-to-ceiling windows illuminated luxurious decorations. Hotel Garou was the premier place for wolf-y vacation as well as the location of the annual Gathering. Apparently mate-finding needed to happen in the lap of luxury.

She needed to see the Ruling Wardens. Now. Today. They were responsible for creating the magic that delivered the Gathering summons to her home. Now they needed to get their mojo working on why she’d been ordered to attend. Hopefully before the Gathering wrapped up shop for the year.

The Gathering was meant to be a big ol’ party where those who carried a Mark could mingle with Alpha Pairs and hopefully find their mates. Of course, if a Marked wasn’t mated by age thirty, their attendance was required. The Wickham triplets had hit thirty and here they were. Not showing up resulted in… something. She still wasn’t clear on what would have happened if the Wickham gals had stayed home.

The problem Whitney faced was that while the first two of the Wickham triplets, Scarlet and Gabriella, carried a Mark, she did not. She’d checked. Hell, her sisters had even looked in those hard to reach places. There was no flesh-colored, scar-like symbol on her body indicating she’d someday mate two werewolves and live happily ever after.

There would be no “woo hoo, cue the rice tossing and tie a few cans to the bumper of their car” for Whitney Wickham. She wasn’t bitter. Not much, anyway.

She wanted that happy ending, damn it, but she couldn’t have it until the Wardens figured out where their mojo went wrong. Hell, for all she knew there were wires crossed inside her and that’s why she’d been summoned. That was probably the reason she hadn’t ever been happy with any of her exes. It was like bits and pieces of her were Marked while the rest wasn’t. The “want to” was there but the “screw you, it’ll never happen” was a little too strong. Could that be her problem?

She didn’t know the answer to that question because the freaking Ruling Wardens were dealing with legitimate concerns.

“You aren’t a wolf nor a Marked. The Ruling Wardens are resolving wolf matters.” The organizer growled, his eyes flashing yellow and he curled his lip.

Oh heck no, she wasn’t about to be intimidated. Gripping the pen even tighter, she raised her hand, ready to stab the wolf. She been hauled halfway around the world and had spent the last two days simply waiting for the Wardens to arrive. They’d dragged their asses and now she didn’t have a legitimate concern. She’d show him legitimate.

Whitney growled, ready to poke tiny holes into the man, only to have her fun snatched from her. Literally.

“No stabbing ma peeps, Whit. If I hafta be nice to ’em, so do you.” Her sister Scarlet plucked the pen from her hand and then gave the organizer her attention, popping him on the nose with it as if he were a wayward puppy. “Callum, she pulled the ‘Kickass Sister Card.’ Learn it, live it, love it and call it yours because God and everyone takes it. The KSC isn’t like Diner’s Club, bucko. Think of it as an American Express Centurion card.”

The wolf narrowed his eyes, but what could he say? Two days ago, Scarlet mated the Ruling Alpha Pair of North America. Basically, she was now the Queen Beyotch. And having way too much fun with her new position.