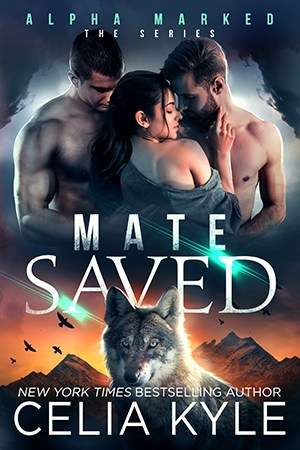 Thirty and single? Well, getcha butt to the Gathering! Wait… what?

Paisley Twynham is over the whole werewolf thing. It’d been a shock to be magically kidnapped and plopped in the middle of a werewolf gathering. Then she got kidnapped a second time, had the crap beat out of her, escaped, and then met two men who are supposed to be her mates. Yup, all kinds of “over” the Gathering. Her only salvations are her sisters and… the two men she can’t help but drool over. Tall, muscular, sexy as hell, and for some reason, they want her fluffy ass. Maybe she doesn’t hate werewolves as much as she thought…

Chance and Hawkins don’t quite have a solid Warden bond. Hawkins is holding back while Chance is slowly reaching the end of his patience after ten years of partnership. The only woman who might save them is Paisley. Seductive, curvaceous, vivacious Paisley Twynham. She’s their Warden Born mate and Chance refuses to let Hawkins’ past stand in the way of their future.

But something else hides in their path that threatens to end their mating before it begins. Or rather, someone.

Paisley was kinda wishing she’d taken self-defense lessons with Lorelei rather than yoga. Downward dog wasn’t gonna save her. Neither was upward dog. There was no bendy doggy pose that would get her battered, bloody, and stinky body free of these cuff-ish things.

Kidnapped by a black hurricane, deposited in a fabu hotel, kidnapped again by some sexy looking wolf, and now she was shoved in the corner of a run down, disease-infested hotel room.

Run down was a given, but the disease-infested was more of a guess. She’d seen more than one cockroach—okay, a dozen—and she coulda swore she saw a pair of rats getting busy on the other side of the room.

The AC kicked on, rumbling and rattling to life before sending more of the putrid aroma of the room toward her. It smelled so bad she was sure more than one person had died in the place. What’d they do, clean with Windex and call it good?

Now wasn’t a time for laughing. No, she shouldn’t make a single sound. Which was why she suppressed the desire to chuckle. She’d already learned what happened when she brought attention to herself.

She gently stroked her face, fingers carefully prodding the swelling around her eye. Mouthing off to her kidnappers wasn’t a good idea. She’d been snatched, and the first time she called one of them a fuckhole, she’d been cold cocked and didn’t wake up until they tossed her on the hotel room’s dingy floor.

Gah, she’d need a million antibiotic shots when she finally got away. After three days, she wasn’t optimistic anyone would find her. Hell, were they even looking?

She swallowed her sigh.

The big guy, the main guy, was pacing across the small room, his booted feet pounding against the grime-caked carpet. It was near black but she imagined it’d once been a generic brown. He stomped toward the bathroom, cell phone plastered against his ear, and then spun and came toward her. The glare on his features was unmistakable. As was the gray hair—no, fur—that coated his cheeks.

Wolf fur. The unhinged giggle that threatened nearly burst into the air, but she slammed the lid on the urge just in time.