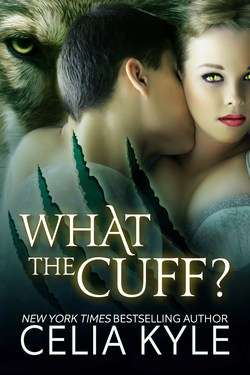 God really should have reconsidered making werewolves. Because werewolves like Lyssa could easily rip to pieces, limb from limb, cheating assholes like Byron, her live-in boyfriend. That, or Lyssa needs to have better taste in men...and stay faraway from those with wandering eyes.

Drunk as a wolf, she stumbles to her best friend's house to sleep off her whiskey-induced haze, and wakes to...cuffs?

Caleb sees his chance and finally seizes it. His buddies on the force have ribbed him but good for buying silver-plated handcuffs. But Caleb had a perfectly logical reason for purchasing them; he had something important to tell Lyssa, and being that she could put a serious hurtin' on him, he wasn't going to take any chances.

So, with a bound werewolf, the woman he's yearned for since they were teens, in his bed, will Caleb find the courage to tell Lyssa that she is his?

God obviously had never considered cheating men when he'd given Lyssa her shifter abilities. Nope. As infallible as the all mighty creator was supposed to be, he definitely hadn't considered that man would be so stupid as to cheat on a werewolf. If he had, he'd have known that giving a woman the power to grow inch long canines that could rip a cheating man to shreds was a mistake.

Oh well, Byron was just about to learn the error of his ways.

The scents of sex, Byron and some anonymous female, had filtered and danced through Lyssa's home when she'd stepped across the threshold. Her. Home. He'd brought some bimbo into their shared space and now, he'd pay. Hell, maybe they'd both pay. A person really couldn't look at the house and imagine that Byron had decorated it, could they? The fact that the woman went after a claimed man meant the stranger would feel her wrath just as surely as Byron would.

Byron's heavy, aroused musk served to piss her wolf the fuck off. Couple his scent with the sticky sweetness of the woman and the animal was ready to tear the house apart looking for them. As it was, she didn't have to look far to find them. Of course, they'd use the bedroom.Her. Bedroom.

Breathe…just breathe.  Another wave of their combined scents assaulted her and she amended her thoughts.  Okay, breathe through my mouth. In and out. Slow and steady.

Right, slow and steady was how she'd rip them to shreds.

One mouthful of muscle, blood and bone at a time.

She leaned against the wall outside her bedroom and waited for the bimbo inside to finish. From the grunts she heard from Byron, it wouldn't take him much longer to get to the finish line. Then again, he always was a one minute man.

The woman though, she was taking  for-ev-er.

At least, that's what he'd be screaming when she went in there with fangs bared and eyes glowing like the full moon.

True, she didn't really love the man, but he was hers. For the moment. And no one cheated or dumped Lyssa McGivern. Not even some pasty white, pansy-assed human male.

She pinched the bridge of her nose as the screams from the bimbette grew louder and louder. Man, some women knew how to fake it. Byron could never squeak an orgasm out of her, so she couldn't figure out how he was managing to pull anything remotely like the big O out of the woman. She checked her watch. Six fifteen. If they'd just finish already, she could get him, and his shit, out of her house and still manage to watch the ten o'clock news.

Much faster and he'll finish before you do, sweetheart.

She almost felt sorry for the woman…almost.

Horror washed over Lyssa. He was in her ass? She resisted the urge to snort. Barely. The woman deserved whatever she got with Byron if she allowed the man to dominate her. Hell, they deserved each other. She'd never bent to her boyfriend's–make that ex-boyfriend's–ill and given him her ass. To her kind, that was as good as handing a man a "fuck me over" pass and showing their belly. She'd done that exactly once, to her alpha, and she'd never do it again as long as she lived.

"Yes, fuck me, please Byron," the woman pleaded. Yeah, she'd be begging even harder when he finished before she did and left her wanting.

Lyssa peered around the doorway, peeking through the two inch gap and smirked. Okay, the bitch had grit. She may have given Byron her ass, but she rode him like a cowgirl, holding the reigns while he struggled beneath her to keep up.

Lyssa tilted her head to the side, eyes following them as the stranger gave her man pleasure. Come to think of it, she didn't think she'd ever seen that look of pure rapture on Byron's face when they'd made love. Not…ever.

The grunting, groaning, and moaning grew in volume again as seconds ticked by. She checked her watch. Yup, about time Byron's stamina gave out. The woman riding him screamed and arched with what Lyssa assumed was her orgasm.

It wasn't watching them have sex. Sex? She'd seen more sex in her lifetime within her pack to last her two more. No, it was something else. Something…different about these two writhing on the sheets she'd paid for.

Byron's chocolate brown eyes softened as he stared at the woman perched atop him. The harsh planes of his face, normally taut and drawn when he looked at Lyssa, seemed more…relaxed. He stroked and caressed the woman, hands sliding over the skin of her arms, shoulders and back in long sweeping passes. The woman leaned over Byron's chest, nuzzling and scraping her teeth at the juncture of his shoulder and neck.

She opened her mouth to tell the stranger that he didn't like that, didn't like his neck touched and definitely didn't care for cuddling after sex. But…but a smile creased her ex's lips and he appeared to grasp her tighter, pulling her closer.

Lyssa eased through the door and Byron's eyes snapped open, colliding with hers. In that moment, that second, she knew. She'd never loved Byron. It was a given in their relationship. She was with him because his success matched her own and they seemed to like the same things.