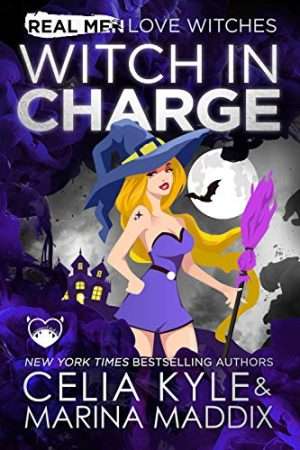 It's all fun and games until Kelly's gargoyle statue turns into a real man...

If there's one thing Party Witch Extraordinaire Kelly Holloway likes, it's a good time. So what if her coven thinks she's so immature they've tacked an extra year onto her wardship? Of course, that's why it's such a surprise when she learns she's inherited Hollow House. Oh, the epic ragers she plans to throw!

But all isn't Jello shots and booty calls. Not only does she have to deal with two quirky roommates she's forced to take in, a snarky vampire living in her basement (rent free, no less!), and a curmudgeonly new boss who doesn't find her habitual tardiness the least bit charming, but also a pesky sentient house that seems hell-bent on thwarting her love life.

Things only get weirder when the gargoyle statue she's been messing with for months turns into a man. A hot man. The hottest she's ever seen. And Ronun's not a fan of Kelly's...at all. Considering all of the funny outfits she's dressed him in, she can't really blame him. But...dayum. He's so fine even Hollow House seems to like him.

Whatever. Kelly has far more important things to focus on--such as finding her family's missing spell book so she can figure out how to rein in the uncontrollable Hollow House, impress her dubious boss, and break the curse that turns Ronun to stone for half the day.

Hey, no pressure or anything!